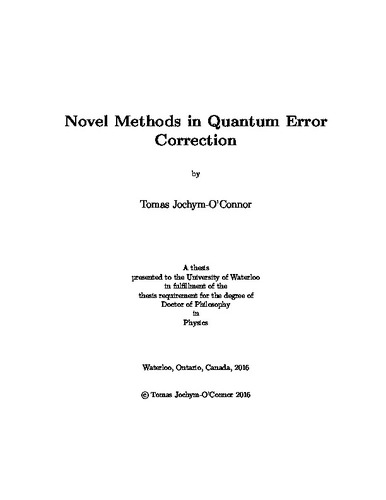 Quantum error correction is the backbone of fault-tolerant quantum computation, a necessary requirement for any large scale quantum computer. The fault-tolerance threshold theorem has long been a target for experimental precision, allowing for the possibility of reducing logical error rates to arbitrarily low levels without excessive overhead. While there are many promising fault-tolerant architectures, the path towards the most practical fault-tolerant scheme is far from decided and may vary for differing physical models. This thesis proposes new schemes for universal fault-tolerant quantum computation in both the concatenated and topological code settings. Through the concatenation of two different error correcting codes, a set of universal fault-tolerant gates can be obtained without requiring the need for magic state distillation. A lower bound of $1.28 \times 10^{-3}$ for the fault-tolerance threshold under circuit level depolarizing noise is obtained. Additionally, stacked codes are proposed as a means to simulate the action of a 3D topological code in 2D, allowing for the application of a universal set of transversal operations. While fault-tolerant, unfortunately the scheme does not exhibit a threshold due to the decreasing pseudo-threshold with growing code distance, yet points to potential interesting avenues for fault-tolerant computation in 2D without distillation. One of the primary avenues to constructing fault-tolerant logical operations is through transversal operations. In this thesis, the set of single qubit logical gates that can be implemented transversally are characterized and determined to all belong to the Clifford hierarchy. Moreover, any diagonal two-qubit operation that can be applied transversally must belong to the same level of the Clifford hierarchy as the set of gates that can be implemented in the single-qubit case. The opposite to quantum error correction is privacy, where the output of a channel is disguised from its input. The two are fundamentally related through the complementary channel construction. This thesis presents a new class of private quantum channels, expanding the existing class beyond a seemingly fundamental restriction. This yields interesting insights into the structure of quantum information and the leaking of information to external environments. Additionally, the duality is only recovered when extending the complementary channel to sufficiently high environmental dimension. Finally, the error properties of bucket brigade quantum Random Access Memory (qRAM) are assessed. It is determined that using the bucket brigade qRAM architecture for the running of Grover's algorithm necessitates reducing the error rate of the individual components to exponentially small levels for an exponential sized memory. As such, fault-tolerant architectures will likely play an essential role in the construction of such computing primitives.