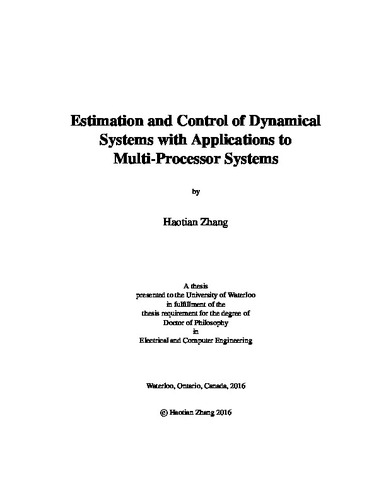 System and control theory is playing an increasingly important role in the design and analysis of computing systems. This thesis investigates a set of estimation and control problems that are driven by new challenges presented by next-generation Multi-Processor Systems on Chips (MPSoCs). Specifically, we consider problems related to state norm estimation, state estimation for positive systems, sensor selection, and nonlinear output tracking. Although these problems are motivated by applications to multi-processor systems, the corresponding theory and algorithms are developed for general dynamical systems. We first study state norm estimation for linear systems with unknown inputs. Specifically, we consider a formulation where the unknown inputs and initial condition of the system are bounded in magnitude, and the objective is to construct an unknown input norm-observer which estimates an upper bound for the norm of the states. This class of problems is motivated by the need to estimate the maximum temperature across a multi-core processor, based on a given model of the thermal dynamics. In order to characterize the existence of the norm observer, we propose a notion of bounded-input-bounded-output-bounded-state (BIBOBS) stability; this concept supplements various system properties, including bounded-input-bounded-output (BIBO) stability, bounded-input-bounded-state (BIBS) stability, and input-output-to-state stability (IOSS).We provide necessary and sufficient conditions on the system matrices under which a linear system is BIBOBS stable, and show that the set of modes of the system with magnitude 1 plays a key role. A construction for the unknown input norm-observer follows as a byproduct. Then we investigate the state estimation problem for positive linear systems with unknown inputs. This problem is also motivated by the need to monitor the temperature of a multi-processor system and the property of positivity arises due to the physical nature of the thermal model. We extend the concept of strong observability to positive systems and as a negative result, we show that the additional information on positivity does not help in state estimation. Since the states of the system are always positive, negative state estimates are meaningless and the positivity of the observers themselves may be desirable in certain applications. Moreover, positive systems possess certain desired robustness properties. Thus, for positive systems where state estimation with unknown inputs is possible, we provide a linear programming based design procedure for delayed positive observers. Next we consider the problem of selecting an optimal set of sensors to estimate the states of linear dynamical systems; in the context of multi-core processors, this problem arises due to the need to place thermal sensors in order to perform state estimation. The goal is to choose (at design-time) a subset of sensors (satisfying certain budget constraints) from a given set in order to minimize the trace of the steady state a priori or a posteriori error covariance produced by a Kalman filter. We show that the a priori and a posteriori error covariance-based sensor selection problems are both NP-hard, even under the additional assumption that the system is stable. We then provide bounds on the worst-case performance of sensor selection algorithms based on the system dynamics, and show that certain greedy algorithms are optimal for two classes of systems. However, as a negative result, we show that certain typical objective functions are not submodular or supermodular in general. While this makes it difficult to evaluate the performance of greedy algorithms for sensor selection (outside of certain special cases), we show via simulations that these greedy algorithms perform well in practice. Finally, we study the output tracking problem for nonlinear systems with constraints. This class of problems arises due to the need to optimize the energy consumption of the CPU-GPU subsystem in multi-processor systems while satisfying certain Quality of Service (QoS) requirements. In order for the system output to track a class of bounded reference signals with limited online computational resources, we propose a sampling-based explicit nonlinear model predictive control (ENMPC) approach, where only a bound on the admissible references is known to the designer a priori. The basic idea of sampling-based ENMPC is to sample the state and reference signal space using deterministic sampling and construct the ENMPC by using regression methods. The proposed approach guarantees feasibility and stability for all admissible references and ensures asymptotic convergence to the set-point. Furthermore, robustness through the use of an ancillary controller is added to the nominal ENMPC for a class of nonlinear systems with additive disturbances, where the robust controller keeps the system output close to the desired nominal trajectory.