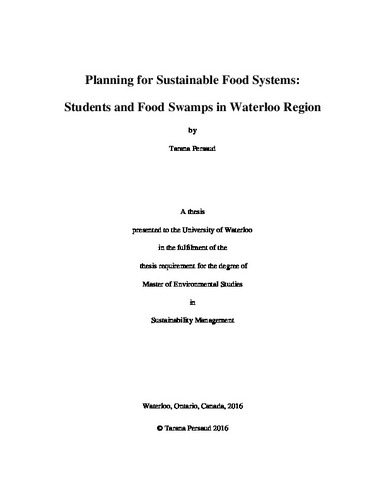 Since its official definition in 1996 at the World Food Summit, food security has been a focal point in the development of living spaces, with the aim of ensuring that sufficient, healthy food is accessible to all. However, meeting the criteria of food security as defined has proved to be problematic in society. Consequently, researchers and policy makers have identified many challenges to achieving universal food security, with a recent focus on urban areas. One such challenge has been described as ‘food swamps’, which are areas where food availability and accessibility are adequate, but processed and calorie-dense foods dominate the market in place of healthy foods. Recent research in Waterloo Region identifies food swamps as a major obstacle in achieving food and nutrition security, resulting in unhealthy and/or processed foods being more readily available and in higher quantities than healthier alternatives. Waterloo Region is home to two large universities, with a student population of approximately 50,000. There is evidence that suggests a correlation between poor food consumption habits and the academic outcome and general well-being of students. Using this as a starting point, this research has two primary objectives: (1) to document the extent to which students who reside in Waterloo Region are exposed to food swamp and (2) to understand the relationship students maintain with their food environment, and whether a sustainable food system as a concept is perceived to have value. Through the use of inductive and exploratory research, data was obtained in the form of an online survey that was shared through various social media platforms, and via email to University of Waterloo’s administrative departments. A total of 263 responses were eligible for comparative data analysis. The results showed a majority of students residing in the city of Waterloo and having more access to processed foods than to fresh and nutritious foods due to both cost and distance. Approximately forty-five percent of students identified not having adequate access to fresh food. These findings support the fact that students reside in areas in which food swamps have infiltrated the food retail landscape. The retail food system is dominated by the business sector, with nutritional balance in the food landscape being historically omitted from the urban planning agenda. Students’ interest in the food system was twofold: (1) one group was not interested and majority of these students indicated they already understood the process to some extent and (2) the other group of students expressed interest in learning more, although some indicated lack of time being a constraint. This strengthens the case for developing a sustainable food system, as students stand to benefit from both new and updated knowledge on food production and nutrition awareness, bridging the gap between urban consumers and their food.