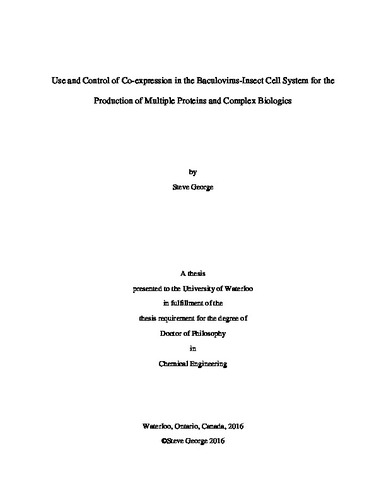 The ease of use and versatility of the Baculovirus Expression Vector System (BEVS) has made it one of the most widely used platforms for recombinant protein production. In the last ten years, the system has even gained commercial acceptance for the production human biologics such as for the production of human papillomavirus vaccine (Cervarix®) and influenza vaccine (FluBlok®). The work presented in this thesis aims to further the utility of this system in coexpressing multiple proteins within a single cell, with the final goal of setting up designed and tightly controlled gene expression schemes within insect cells. In this work we explore the effect of using different Autographa californica multicapsid nucleopolyhedrovirus (AcMNPV) promoters to control the timing and expression of multiple proteins within insect cells. We do this first in a simple two fluorescent protein system where protein and RNA expression levels of these two proteins are tracked over time and complex interaction effects are evaluated. Some of these promoter combinations are then used in a more complex and industrially relevant influenza VLP production system, in which effects such as significant post translation modification, protein trafficking to the cell membrane, insertion of protein into the membrane, and VLP budding from the surface are present. These studies coexpress two influenza proteins – the Hemagglutinin (HA) and Matrix 1 (M1) proteins genetically fused to eGFP and DsRed2 fluorescent proteins to easily track influenza protein localization and expression levels within insect cells, and to track influenza virus-like particles in culture supernatant. Lastly, we examine the effect of coexpressing superoxide dismutase as a helper protein to extend the lifespan of insect cells post-baculovirus infection.

Steve George (2016). Use and Control of Co-Expression in the Baculovirus-Insect Cell System for the Production of Multiple Proteins and Complex Biologics. UWSpace. http://hdl.handle.net/10012/10660