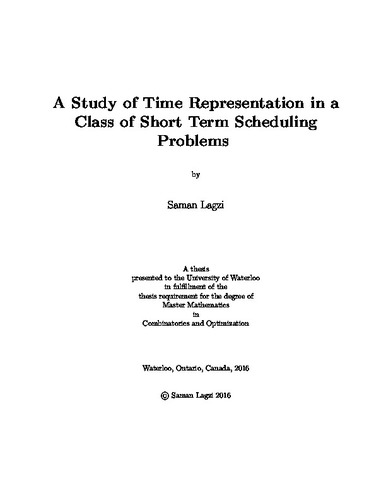 The problem of scheduling operations has received significant attention from academia and industrial practitioners in the past few decades. A key decision in various scheduling operations problems is when to perform an operation and thus the quality of the final schedule can be seriously affected by the choice of how to model the times at which such a decision may take place. The two most commonly used approaches for modeling these times are: Discrete time approaches, which pre-specify a finite set of time points when any decision may be taken, and continuous time approaches, in which the optimization model determines, through the use of continuous decision variables, at which point in time the operation will be performed. The focus of this thesis will be to study the benefits and limitations of each of these approaches within the context of an analytical services facility. Such a facility receives a large number of samples that need to be analyzed/processed through a specific sequence of limited resources/machines before its analysis is completed. The results of these analyses form a basis for many of the decisions made in their client industries (e.g. oil and mining), which in turn indicates the economic importance of the analytical services sector. The operations of such facilities have several particular conditions that need to be modeled and a particularly important one is called multitasking. If analyzing each type of samples is regarded as a task, then the machines in such facilities have the ability to perform multiple tasks at the same time as they are able to analyze different types of samples together at the same (as long as their capacity is not overloaded). The above mentioned study will be performed through an empirical comparison of the discrete and continuous approaches that take into account all the conditions in such facilities, including multitasking. While discrete and continuous approaches have often been independently employed, few studies have considered a comparison between them [37, 28, 39]. In addition, none of these studies consider the operational conditions that are present in short-term scheduling of operations in an analytical services facility. Since the continuous time formulations in the literature are not capable of accounting for multitasking, this thesis presents a novel continuous time mixed-integer linear programming (MILP) formulation that is capable of accommodating such feature and several other operational constraints present at analytical services facilities. The performance of the presented formulation is studied in comparison with a singletasking formulation. The results show that, while the multitasking formulation is not more costly in terms of solution time, it is capable of producing significantly better solutions. Furthermore, this thesis extends the idea of flexible time discretization for discrete time formulations, previously proposed by Velez and Maravelias [40], to be able to account for the operational constraints of an analytical services facility.