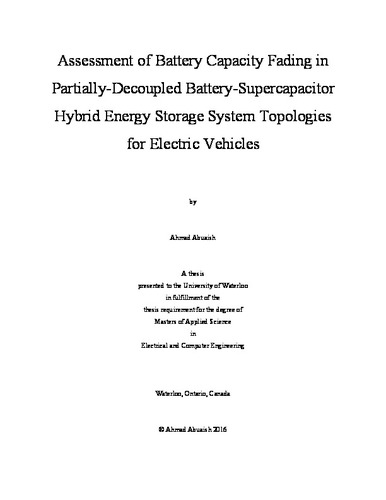 Battery energy storage system (ESS) is a major component of an electric vehicle (EV), as it supplies the entire propulsion power, constitutes a significant share of the EV’s cost and weight, and plays a key role in EV performance. Consequently, extending the battery lifetime is vital, given that batteries in EV propulsion applications experience accelerated capacity fading due to aggressive traction demand and regenerative braking power spikes. Subsequently, it is beneficial to relieve the battery stress by adopting a hybrid energy storage scheme that combines the battery pack with an auxiliary energy storage device of high specific power such as supercapacitor (SC). The SC is used as a power buffer to process the high-frequency component of the traction demand and regenerative braking power. There are many topologies through which the battery and SC can be interfaced with the DC bus. Two partially-decoupled topologies have proved to be the most promising candidate topologies for a hybrid energy storage system (HESS). In the first HESS topology, the battery is connected directly to the DC bus and the SC is interfaced with the DC bus through a DC/DC converter, whereas in the second topology, the SC is connected directly to the DC bus and the battery is interfaced with the DC bus through a DC/DC converter with a bypass diode. Comparative assessment of these topologies in terms of battery capacity fading based on a qualitative analysis is unclear and inconclusive. Therefore, a quantitative analysis is necessary to assess the pros and cons of these HESS topologies in comparison with one another. Generally, HESS is most effective in urban drive cycles rather than highway drive cycles, due to the more frequent occurrence and higher intensity of regenerative braking in urban drive cycles, as the SC is dedicated to processing the generative braking energy. From the study reported in this thesis, it is observed that the second topology is superior to the first topology in extending the battery lifetime. For the same battery pack size in the second HESS topology and battery-only ESS, the battery lifetime in HESS is extended by 18, 4.5, and 8.7% for urban, highway, and urban-highway hybrid drive cycles, respectively, with respect to battery-only ESS. However, for battery-only ESS with an extended battery pack with a monetary value equivalent to that of the second HESS topology, the battery pack lifetime of the former is longer than the latter. In this thesis, an onboard integrated charger scheme is proposed, which eliminates the active rectifier in the original onboard charger, yielding significant cost savings. In the integrated charger scheme, the traction inverter and HESS DC/DC converter are used to realize the two-stage charger topology. Also, two single- pole-double-throw (SPDT) switches are added between the traction inverter and motor, which connect the inverter to the motor during propulsion and to the charger outlet during charging. Further, it is observed that HESS lifetime is about 4% higher compared to that of the battery-only ESS with and extended battery pack, where the monetary value of battery pack extension is equal to the cost of the SC minus the cost of the original active rectifier.