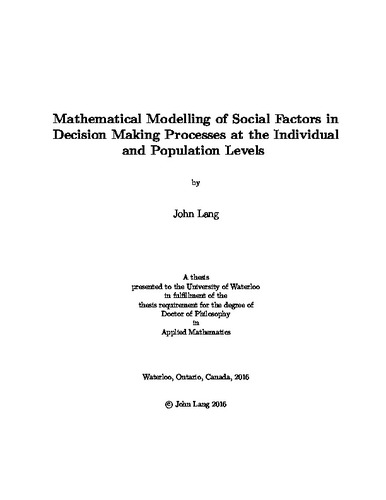 In this thesis we apply mathematical modelling techniques to investigate the implications of social influence on decision making processes in two related contexts. The first problem concerns the mathematical modelling of civil unrest. We consider the collective action problem facing individuals who are deciding whether or not to join a political revolution or protest in a dictatorial regime that employs censorship and repression. In studying this problem we develop both a population-level model and a network-based individual-level (or agent-based) model. The population-level model establishes a conceptual framework that can be used to understand the role that new communication technologies (e.g. the Internet, satellite television, Short Message Service (SMS) text messaging, social media, etc.) may have played in facilitating the political revolutions of the Arab Spring. We establish the consistency between the individual-level model and the population-level model, and show methodologically how these two modelling strategies can be applied to complement one another, establishing a hierarchy of differential equation models that explicitly take the structure of the social network into account. Finally, using proxy network data for network structure pre- and post-adoption of new communication technologies, we perform small-scale computational simulations of our individual-level model in order to establish quantitative evidence that the political revolutions of the Arab Spring may have been facilitated by new communication technologies. The second problem concerns the spread of smoking and obesity in populations. We consider two conformity problems that individuals face when deciding whether to join one population sub-group over another (or possibly over many others) in the context of two non-communicable diseases. We begin by studying the smoking epidemic over the past century, where individuals are given the choice to smoke or not to smoke. We establish a new data set for smoking prevalence over the past century in seven developed countries and use it to calibrate a population-level mathematical model for the dynamics of smoking prevalence. We compare our model's predictions to an independently established measure of individualism/collectivism, i.e. Hofstede's Individualism versus Collectivism (IDV) measure, and find evidence that a society's culture can have a quantitative effect on the spread of a contagion. Finally, we study the dynamics of individuals' body mass index (BMI - defined as weight divided by height squared). We establish an individual-level model that also has implications at the population level. At the population level our model fits empirical BMI distributions better than the log-normal and skew-normal distribution functions, i.e. two distributions commonly used to fit right-skewed data, and provides a mechanistic explanation for the right-skewness observed in empirical BMI distributions. At the individual level our model is able to reproduce the average and standard deviation in individuals' year-over-year change in BMI. At both the individual and population levels our model finds evidence in support of the hypothesis that social factors play a role in the dynamics of individuals' BMI.