A Model for Shear Response in Swimming Plankton 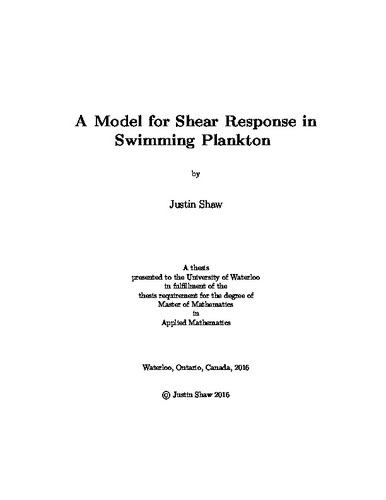 The responses of zooplankton to the hydrodynamic variables of their environment, such as shear, are not well understood. We examine stochastic swimming models of the run and tumble type for plankton moving in a velocity field induced by internal waves in a channel. The swimming of individual plankton is modeled as a random walk, modified to include a shear response and a biased swimming towards a preferred light level. An inertial particle model is developed from first principles, and compared to a particle model based on the integral curve definition. In all, twelve particle models for the motion of plankton under advection and their own propulsion are considered. The model which includes the forces of gravity, biased swimming, and a freeze in shear response predicts aggregation of plankton populations along the bottom boundary of high shear regions. It is also shown that all models considered predict vertical patches.