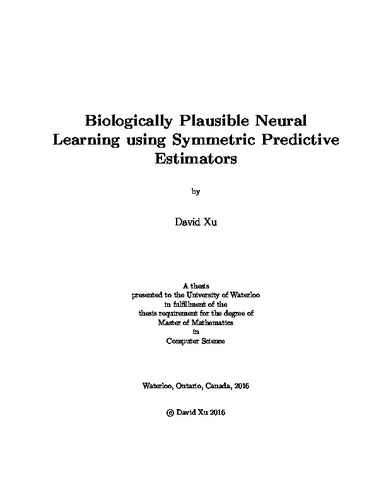 A predictive estimator (PE) is a neural microcircuit hypothesized to explain how the brain processes certain types of information. They participate in a hierarchy, passing predictions to lower layers, which send back prediction errors. Meanwhile, the network learns optimal connection weights in order to minimize the prediction errors. This two-way process has been used to hypothesize models for brain mechanisms, such as visual information processing. However, the standard implementation for a PE uses the same weight matrix for both feed-forward and feed-back projections, which is not biologically plausible. In this thesis, we investigate the predictive estimator using individual feed-forward and feed-back connection weights. We extend the model and introduce the Symmetric Predictive Estimator (SPE). We investigate the dynamics of a SPE network, analyze its stability, and define a general learning rule. A functional model of the SPE is implemented analytically, and in a neural framework using spiking neurons. Both implementations are built as Python modules that can accept generic, numerical inputs. With a series of general experiments, we demonstrate its ability to learn non-linear functions and perform a supervised-learning task. This variation on the PE may provide insights to the theory of predictive estimators and their role in the brain.