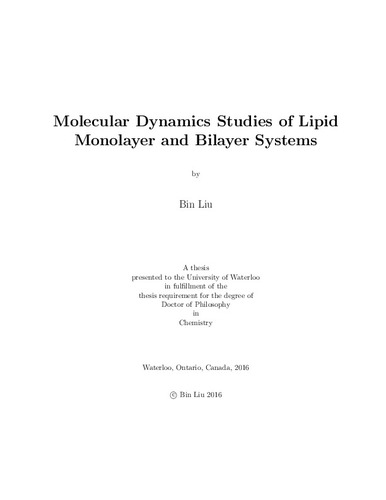 Lipids are a crucial ingredient of biomembranes in cells, and they play a pivotal role in many chemical and biological processes. Lipid based structures, such as lipid monolayers and lipid bilayers, both natural and artificial, are gaining their importance and popularity in drug delivery. In this thesis, our main interest is on using molecular modeling and atomistic molecular dynamics simulations to study lipid monolayers and bilayers, and their physical properties and interactions with an antibiotic molecule called daptomycin. This thesis is composed of the research results from two projects. The first project focuses on an atomistic molecular dynamcis study of lipid Langmuir monolayers composed of both pure zwitterionic dipalmitoylphosphatidylcholine (DPPC) and a mixture of DPPC and cationic cetyltrimethylammonium bromide (CTAB). The cationic CTAB lipids have been found to have significant condensing effect on the DPPC / CTAB monolayers, i.e., at the same surface tension or surface pressure, monolayers with higher CTAB molar fraction have smaller area per lipid. With this condensing effect, the DPPC / CTAB monolayers are also able to achieve negative surface tension without introducing buckling into the monolayer structure. The condensing effect is caused by the interplay between the cationic CTAB headgroups and the zwitterionic phosphatidylcholine (PC) headgroups which has electrostatic origin. Moreover, detailed analysis of the structural properties of the monolayers, such as the density profile analysis, hydrogen bonding analysis, chain order parameter calculations and radial distribution function calculations were also performed for better understanding of cationic DPPC/CTAB monolayers. A chapter is dedicated to the discussion of the mean and Gaussian curvatures of the pure DPPC and DPPC/CTAB mixture monolayers. In the second project, MD simulations were employed to study the atomistic details of the antimicrobial activities of daptomycin, a cyclic anionic lipopeptide which treats infections caused by Gram-positive bacteria, with emphasis on its interactions with a model bacteria membrane. Despite having itself a net negative charge, it is selective against negatively charged bacterial membranes. It has been established that daptomycin’s antibiotic activity is based on targeting the bacterial membranes and that this antibacterial activity depends on calcium ions. Importantly, however, both the precise role of ions and the physical mechanisms responsible for daptomy-cin’s action remain poorly understood. We investigate these issues using three types of molecular dynamics simulations: free energy calculations for a single daptomycin, unbiased simulations for daptomycin tetramers and micellation of daptomycin both in the absence and presence of calcium ions.