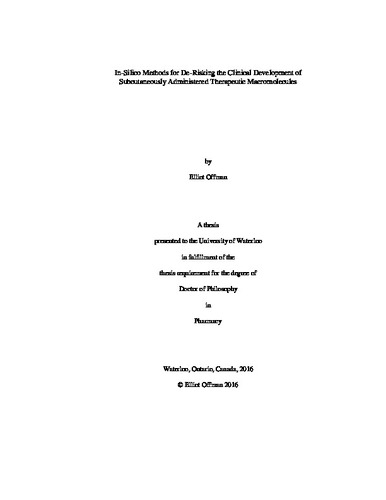 Prediction of human pharmacokinetics (PK) following subcutaneous (SC) administration to animals is challenged by potential interspecies differences in skin anatomy and physiology. With respect to biologic or macromolecule drug development, the SC route is gaining substantial interest as a primary route of drug administration over intravenous due to convenience and cost factors. The bioavailability and time course of a SC administered macromolecule can potentially be influenced by local clearance (CL) processes in the SC space after injection, and due to size constraints, is subject to varying degrees of lymphatic uptake following injection. Traditional allometric techniques employed in interspecies scaling are limited to extrapolation of an average value for PK parameters such as clearance (CL) or volume (V), and provide no information on the time course of a drug after administration. In many cases, PK parameters are estimated using non-compartmental (NCA) methods which, in violation of the assumptions of NCA, requires CL to occur via the sampling compartment. Dedrick plots that have been employed to predict the time course of a drug after administration, do not consider species differences in extravascular drug absorption processes. In contrast, model-based methods such as population based compartmental methods allow for an estimation of absorption processes, along with CL and V, in animals, which can then be scaled to human values according empiric allometric relationships. Physiologically- based PK (PBPK) methods allow for a mechanistic means of accounting for the SC time course and further allow for incorporation of local CL processes and lymphatic transport. Model-based drug development has the potential to minimize reliance on animal data to inform human clinical trial design. Moreover, models developed with an intention to translate animal findings to human scale offer an opportunity to streamline clinical development through trial simulation, thus reducing the time and cost of developing a new therapeutic product. With an aim to de-risk biologic and biosimilar drug development, this thesis describes the development and evaluation of (1) a nonlinear mixed effect model incorporating allometric relationships and (2) a PBPK model incorporating an SC depot compartment, based on a single non-human primate (NHP) species, to predict the PK of a SC administered macromolecule. For reference, model-based methods are compared to traditional allometric and model-independent methods employing the same data used in the model-based approaches. Single-species allometric scaling of CL based on an empiric scaling factor previously demonstrated to support reasonable extrapolation from NHP to humans (i.e. 0.85) failed to predict human CL within a reasonable and pre-determined threshold fold error (i.e. predicted/observed falling with 0.7-1.3). Dedrick plots predicted secondarily-derived PK parameters such as Cmax and Tmax reasonably well, however clearly underperformed in predicting the early portion of the SC time course. Model-based approaches provided reasonable estimation of systemic exposure parameters and prediction of the time course, with PBPK models providing an opportunity to mechanistically appreciate influential factors in the SC time course of a macromolecule. As a novel development the SC time course of a macromolecule could be reasonably simulated by a PBPK model incorporating lymphatic biodistribution and whereby the SC injection was parameterized as a depot compartment within the skin insterstitial space. Similarly for the first time in published literature, a population-based PBPK model was developed incorporating lymphatic system interindividual variability which was demonstrated to predict the time course of a macromolecule in a population of humans.