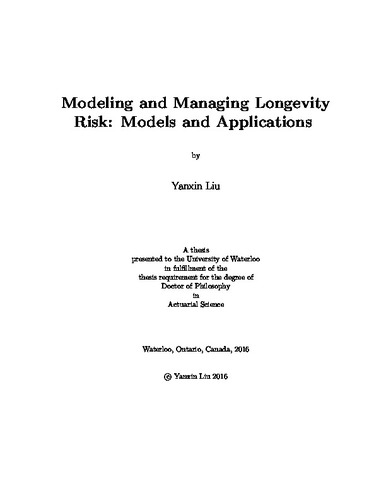 With the threat of longevity risk to the insurance industry becoming increasingly apparent in recent years, insurers and reinsurers are concerned about how to better model and manage longevity risk. However, modeling and managing longevity risk is not trivial, due in part to its systematic nature and in part to the excessive amount of risk factors that constitute the risk. The theme of this thesis is modeling and managing longevity risk. In particular, this thesis focuses on four types of uncertainties among all possible risk factors. These four risk factors include 1) mortality jump risk; 2) longevity drift risk; 3) population basis risk; and 4) cohort mismatch risk. In the current literature, a number of stochastic mortality models with transitory jump effects have been proposed to capture mortality jump risk. Rather than modeling the age pattern of jump effects explicitly, most of the existing models assume that the distributions of jump effects and general mortality improvements across ages are identical. Nevertheless, this assumption does not appear to be in line with what can be observed from historical data. In this thesis, we addressed this disconnect by introducing a Lee-Carter variant that captures the age pattern of mortality jumps by a distinct collection of parameters. The model variant was then further generalized to permit the age pattern of jump effects to vary randomly. We illustrated the two proposed models with mortality data from the United States and English and Welsh populations, and further used these data to value hypothetical mortality bonds with similar specifications to the Atlas IX Capital Class B note that was launched in 2013. The features we considered were found to have a significant impact on the estimated prices. We then explored longevity drift risk, which is the uncertainty about the mortality trend itself. We tackled longevity drift risk by introducing the locally-linear CBD model in which the drifts that govern the expected mortality trend are allowed to follow a stochastic process. Compared to the original CBD model, this specification results in median forecasts that are more consistent with recent trends and more robust relative to changes in the data sample period. Furthermore, the proposed model also yields wider prediction intervals that may better reflect the possibilities of future trend changes. To mitigate the risk associated with changes in drifts, we proposed a new hedging method called the generalized state-space hedging method which demands less stringent assumptions. The proposed method allows hedgers to extract more hedge effectiveness out of a hedging instrument, and is therefore useful when there are only a few traded longevity securities in the market. To incorporate population basis risk, we further extended the proposed generalized state-space hedging method to a multi-population setting. In this extended hedging method, the hedging strategy is derived by first reformulating the assumed multi-population stochastic mortality model in a state-space representation, and then considering the sensitivities of the hedge portfolio and the liability being hedged to all relevant hidden states. Inter alia, this method allowed us to decompose the underlying longevity risk into components arising solely from the hidden states that are shared by all populations and components stemming exclusively from the hidden states that are population-specific. The latter components collectively represent an explicit measure of the population basis risk involved. Through this measure, a new metric called standardized basis risk profile was developed. This metric allowed us to assess the relative levels of population basis risk that q-forwards with different reference populations, reference ages, and times-to-maturity may lead to. The proposed methodologies were illustrated using real mortality data from various national populations. Similar to population basis risk, cohort mismatch risk is another risk that is related to population differences when conducting an index-based longevity hedge. It arises when the hedger chooses to link hedging instruments to different cohorts. Although existing index-based longevity hedging strategies mitigate the risk associated with period effects, they often overlook the risk associated with different cohorts. The negligence of cohort effects may lead to sub-optimal hedge effectiveness if the liability being hedged is a deferred pension or annuity which involves cohorts that are not covered by the data sample. We proposed a new hedging strategy that incorporates both period and cohort effects. The resulting longevity hedge is a value hedge which reduces the uncertainty surrounding the τ-year ahead value of the liability being hedged in terms variance or Value-at-Risk. We further developed a method to expedite the evaluation of a value longevity hedge. By utilizing the fact that the innovations of the stochastic processes for the period and cohort effects are not serially correlated, the proposed method avoids the need for nested simulations that are generally required when evaluating a value hedge.