Microcystin and Microcystis Destruction by Ozone in Drinking Water Treatment: Constraints and Effects 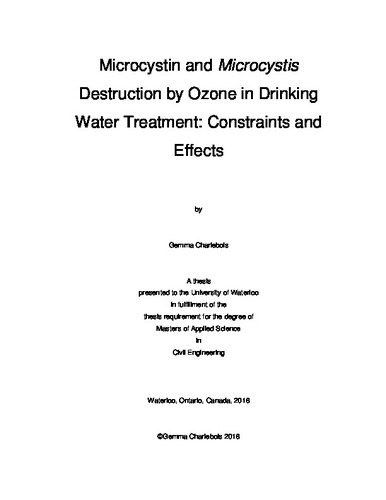 Appropriate and effective drinking water treatment is critical to the protection of public health. Toxic cyanobacterial blooms are a globally increasing drinking water source quality-associated health risk as even very low (>1.5 parts per billion (ppb) or micrograms per litre (µg/L)) concentrations of the cyanobacteria-produced toxin microcystin can be unsafe to drink. Increased pressures on freshwater supplies as well as climate change associated factors such as alternating periods of drought and intense storms and increasing water temperature cause more nutrient runoff into water supplies and create favourable conditions for the growth of cyanobacteria. Ozone is generally understood to effectively destroy many toxins during drinking water treatment. Its efficacy, however, can be adversely impacted by the presence of natural organic matter, often measured as dissolved organic carbon (DOC). The conditions that create favourable growth conditions for cyanobacteria, can also increase the concentrations of DOC in the source water of a drinking water treatment facility. The objectives of this research were to determine whether ozone is an effective cyanobacterial toxin elimination technology at the conditions studied; specifically in the presence of high DOC (~10 mg/L), to determine the efficacy of ozone in the destruction of intercellular (within cells) toxin vs. extracellular (within water matrix) toxin, and to determine the extent of cell destruction by ozone. Bench-scale experiments were conducted. Both extracted toxin and cyanobacterial cells were added to coagulated/flocculated/clarified water collected from the Mannheim Water Treatment Plant in Kitchener, Ontario. Microcystin concentrations were measured by the ELISA method and by liquid chromatography-mass spectroscopy-mass spectroscopy (LC-MS-MS). This investigation confirmed that ozone can destroy extracellular microcystin-LR to below 1.5 µg/L (ppb) at ozone residuals above 0.3 mg O3/L when the aqueous DOC concentration was below 5 mg/L. The relationship between required ozone residual to achieve adequate extracellular toxin destruction and DOC concentration in the water matrix was quantitatively described. Notably, when Microcystis aeruginosa cells were present, an amount equivalent to less than 50% of the concentration of extracellular microcystin-LR was destroyed by ozone. This demonstrates that significant oxidative capacity is required to lyse the cells before ozone can destroy intercellular toxin. The novel contribution of this work is that this relationship was 1) demonstrated through using toxin in extracted and cellular forms and 2) maintained when all other critical operational factors (i.e., ozone residual, DOC concentration, water matrix) were the same. These results underscore the need to reassess operational requirements for ozonation for the treatment of cyanobacterial toxins when intact cells are present as opposed to extracellular toxin, which is used in most performance assessments. Notably, as the aqueous DOC concentration increased, the proportion of live cells present following ozonation (as measured by intercellular toxin concentrations) also increased. Therefore, not only does DOC decrease the efficacy of ozone to destroy toxin, it decreases the oxidative capacity to lyse cells; moreover, the rate is not directly proportional to the aqueous DOC concentration. As a result, increases in ozone residual concentration had a minimal effect on toxin destruction in these cases. In other words, the levels of toxin destruction that would have been expected based on comparable ozone residuals in absence of DOC (or when only low levels of DOC were present) were not achieved because of the significant oxidant/ozone demand of DOC when present at high aqueous (~10 mg/L) concentrations. Another important contribution of this work was the demonstration that not all cyanobacterial cells were destroyed following ozonation; thus, they were described as “Damaged and Potentially Viable (DAPV)” cells. These cells were present at ozone residuals less than 0.45 mg O3/L, logically suggesting that incomplete oxidative treatment occurs at lower ozone residual concentrations. Notably, these DAPV cells may have the potential to reproduce; given this and the common assessment of treatment performance using extracellular toxin, the efficacy and operational requirements of oxidative treatment of cyanobacterial cells by ozonation may need to re-evaluated for situations in which live cells are present. These observations also underscore the need to more fully assess the significance of DAPV cells.