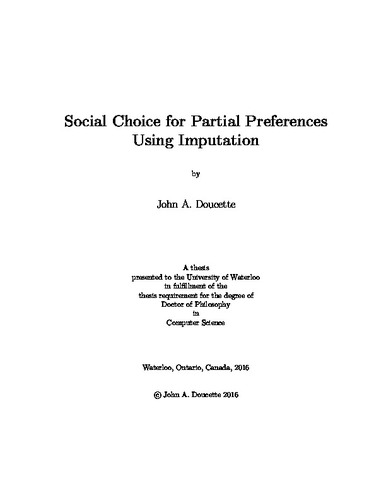 Within the field of multiagent systems, the area of computational social choice considers the problems arising when decisions must be made collectively by a group of agents. Usually such systems collect a ranking of the alternatives from each member of the group in turn, and aggregate these individual rankings to arrive at a collective decision. However, when there are many alternatives to consider, individual agents may be unwilling, or unable, to rank all of them, leading to decisions that must be made on the basis of incomplete information. While earlier approaches attempt to work with the provided rankings by making assumptions about the nature of the missing information, this can lead to undesirable outcomes when the assumptions do not hold, and is ill-suited to certain problem domains. In this thesis, we propose a new approach that uses machine learning algorithms (both conventional and purpose-built) to generate plausible completions of each agent’s rankings on the basis of the partial rankings the agent provided (imputations), in a way that reflects the agents’ true preferences. We show that the combination of existing social choice functions with certain classes of imputation algorithms, which forms the core of our proposed solution, is equivalent to a form of social choice. Our system then undergoes an extensive empirical validation under 40 different test conditions, involving more than 50,000 group decision problems generated from real-world electoral data, and is found to outperform existing competitors significantly, leading to better group decisions overall. Detailed empirical findings are also used to characterize the behaviour of the system, and illustrate the circumstances in which it is most advantageous. A general testbed for comparing solutions using real-world and artificial data (Prefmine) is then described, in conjunction with results that justify its design decisions. We move on to propose a new machine learning algorithm intended specifically to learn and impute the preferences of agents, and validate its effectiveness. This Markov-Tree approach is demonstrated to be superior to imputation using conventional machine learning, and has a simple interpretation that characterizes the problems on which it will perform well. Later chapters contain an axiomatic validation of both of our new approaches, as well as techniques for mitigating their manipulability. The thesis concludes with a discussion of the applicability of its contributions, both for multiagent systems and for settings involving human elections. In all, we reveal an interesting connection between machine learning and computational social choice, and introduce a testbed which facilitates future research efforts on computational social choice for partial preferences, by allowing empirical comparisons between competing approaches to be conducted easily, accurately, and quickly. Perhaps most importantly, we offer an important and effective new direction for enabling group decision making when preferences are not completely specified, using imputation methods.