Evaluating the Impact of Changes to School-Level Alcohol Prevention Policies and Programs on Youth Binge Drinking: A Longitudinal Analysis of the Year 2 and Year 3 Data of the COMPASS Study 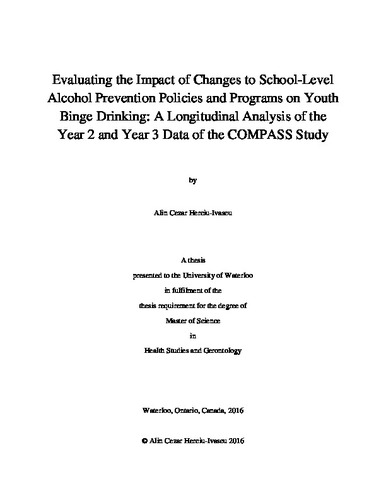 Objective: The purpose of this study was to investigate the effectiveness of alcohol prevention policies and programs implemented in a linked sample of Ontario COMPASS high schools in reducing youth binge drinking over time at both the population- and individual–levels. Methods: This longitudinal study utilized the COMPASS Year 2 and 3 student- and school–level data obtained from the 16,491 linked students who had complete information for the binge drinking outcome measure as well as the relevant student-level covariates and who attended the same 77 Ontario high schools in both years. The COMPASS student-level questionnaire (Cq) was used to measure the relative student-level covariates as well as the binge drinking outcome measure. Binge drinking was measured using the question: “In the last 12 months, how often did you have 5 drinks of alcohol or more on one occasion?” Students who indicated that they consumed 5 or more alcoholic drinks in one occasion either once a month or more frequently were classified as being current binge drinkers. Conversely, individuals who responded that they engaged in a similar pattern of alcohol consumption ranging from less than once a month to never were labelled as being non-current binge drinkers. School-level data regarding the changes in alcohol prevention policies and programs that occurred from Year 2 to Year 3 for this sample of schools was assessed using the Year 3 COMPASS School Policies and Practices (SPP) administrator questionnaire. Using this linked sample, a McNemar’s test was performed to see if there was any significant change in the prevalence of student binge drinking from Year 2 to Year 3. Difference-in-differences changes analyzed using a One-Way Analysis of Variance (ANOVA) and a longitudinal model analyzed using a Generalized Estimating Equation (GEE) were used to determine if changes in school-level alcohol prevention interventions between these two years were significantly associated with a change in the school-level prevalence of student binge drinking as well as with a change in individual student binge drinking behaviours, respectively, over time. Results: At the population level, neither of the 19 specific alcohol prevention interventions (F = 1.00, df1 = 19, df2 = 3679, p-value = 0.4631) nor any of the 6 distinct intervention categories (F = 1.18, df1 = 6, df2 = 1553, p-value = 0.3123) were associated with a statistically significant relative reduction in the school-level prevalence of binge drinking from Year 2 to Year 3 when compared to the change observed in the pooled sample of control schools. Similarly, neither of the 19 specific alcohol prevention interventions (p-value = 0.6976) nor any of the 6 distinct intervention categories (p-value = 0.5355) were associated with a statistically significant increase or decrease in an average student’s risk of being a current binge drinker from Year 2 to Year 3 who attended an intervention school (or category) in comparison to the risk of a similar average student who attended one of the control schools while controlling for important student- and school-level covariates. As expected, the McNemar’s test showed that the proportion of current binge drinkers in the linked sample increased significantly over time as the cohort aged from 14.9% in Year 2 to 24.4% in Year 3 (p-value <.0001). Implications and Conclusions: Only 19 of the 77 Ontario high schools implemented new school-level alcohol prevention interventions between Year 2 and Year 3 with none of them being associated with a statistically significant decrease in binge drinking at the population or the individual level. However, a zero tolerance punishment policy and a student education program involving displays and pamphlets may have shown some potential for possibly having some public health impact on this behaviour at the individual level and should be further explored. Overall, the high school setting may not be the best place to intervene for this type of work and/or the current school-level alcohol prevention initiatives implemented in this province may be too simplistic in nature. Future research should evaluate the impact of more intricate programs that are only partially implemented within the high school environment as well as higher macro-level policies like increasing taxation on alcohol, increasing the minimum legal drinking age, and banning alcohol advertisements within Ontario as these may serve as more promising approaches for reducing youth binge drinking in this province. All of this is important since, unsurprisingly, the prevalence of binge drinking in this sample increased significantly over time as students aged. All in all, this is the first quasi-experimental longitudinal study to simultaneously evaluate the potential ability of multiple different high school-level alcohol prevention interventions to possibly reduce youth binge drinking in order to generate real-world evidence about this topic in Ontario.

Alin Cezar Herciu-Ivascu (2016). Evaluating the Impact of Changes to School-Level Alcohol Prevention Policies and Programs on Youth Binge Drinking: A Longitudinal Analysis of the Year 2 and Year 3 Data of the COMPASS Study. UWSpace. http://hdl.handle.net/10012/10549