The Interdependence of Attention, Memory, and Performance Based Reward 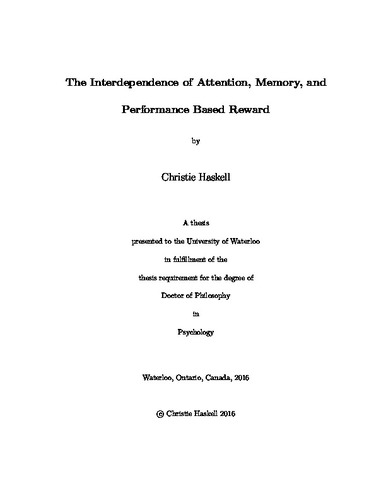 Attention is frequently described as a distinct process with distinct effects, and many researchers have suggested that it has a distinct place in the brain. And yet attention is necessarily entangled with the systems required to complete experimental tasks. Perceptual experiments entangle attentional effects with the properties of perceptual neurons, experiments with transient stimuli entangle the effects of memory with attention, and the early experiments on attention in primates entangled the effects of attention and reward. The purpose of the present thesis, therefore, was to disentangle the effects of attention from the effects of memory and reward on orientation judgements across ten experiments. In all experiments, participants were required to make an orientation judgement from memory of a grating (Chapter 2) or Gabor (Chapters 3 & 4) that appeared briefly on the display. Chapter 2 presents five experiments combining a manipulation of spatial attention using an exogenous luminance cue that was 100%, 80%, or 50% valid with a manipulation of memory consolidation using sequential and simultaneous presentation of two circular gratings. Valid cuing improved performance only when two stimuli appeared together and improved it to the level of performance on uncued sequential trials, whereas invalid cueing always reduced performance. Further, mixture model fitting results indicated that non-predictive cues improved performance by reducing guessing and predictive cues improved performance by increasing precision. These results suggest that, when the demand on memory is greater than a single stimulus, attention is a bottom-up process that prioritizes stimuli for consolidation, thus attention and memory are dependent and synergistic, and that the mechanism by which spatial attention affects precision may be dependent on how we implicitly monitor our environment for statistical regularities. Predictive cues communicate importance about a spatial location and reward is another mechanism that communicates importance, and this is what motivated the experiments presented in Chapter 3. Chapter 3 presents four experiments combining a manipulation of spatial attention via a 50% valid luminance cue with a manipulation of performance-based reward that was communicated to participants by either sound, time, or points. The reward received could be either finely or coarsely related to participant errors and this was manipulated between subjects. Sound and time were ineffective at communicating the reward distribution, but when participants were awarded points, valid cuing improved performance and kurtosis was increased on valid trials only when rewards were finely related to their performance suggesting a dependent relation between reward and attention. One explanation for these results is that reward increases vigilance and attention increases visual search efficiency. The experiment presented in Chapter 4 evaluates this hypothesis. Viewing time was fixed by requiring participants to fixate at the target location to control its offset. We found that under these conditions the effects of cueing and reward were eliminated. Taken together, these results provide evidence that it is not possible to fully disentangle the effects of attention from the system(s) used to perform the task suggesting that spatial attention is not a separate mechanism unto itself, but a property of perception.