The structuring of ambiguous stimuli in human communication 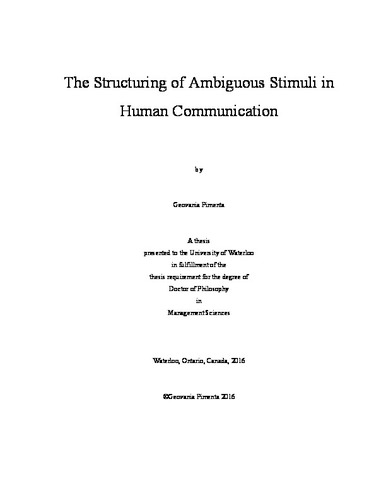 Abstract Information theory (Shannon, 1948) and relative similarity (Rosch and Mervis, 1975) are used to investigate the problem of how people communicate about ambiguous, unstructured stimuli. Specifically, the following one-way communication setting is considered: given a set of ambiguous items available to both a sender and a receiver, the sender uses messages to describe one of the items from the set, such that the receiver is able to identify this target item correctly. It is argued that information reduces uncertainty in ambiguous communication settings through the development of structure, which is conceptualized in terms of a system of categories. During the communication process, distinguishing an item from a set of other items involves clustering items into subsets; that is, grouping items together that are similar to one another and leaving out items that are dissimilar. It is proposed that relative similarity is the cognitive mechanism involved in the development of those categories. It is further proposed that perceptions of relative similarity are made with respect to one attribute. People take advantage of the perceived structure of the ambiguous stimulus and form categories in a goal-directed manner, focusing on whatever attribute best enables them to distinguish the target item from the others (Barsalou, 1983). Each time one attribute is used in communication to refer to a cluster or subset of items, uncertainty is reduced. Furthermore, it is postulated that when people have the choice of one attribute from multiple possible attributes to communicate about unstructured stimuli, two categorization logics operate to reduce uncertainty. Hypothesis 1 predicts that people maximize distinctiveness by choosing the attribute that allows for a larger gap (i.e., greater dissimilarity) between the subset containing the target item and the subset of remaining items. Hypothesis 2 predicts that people maximize information gain by choosing the attribute that allows for the smaller subset containing the target item. The theoretical framework is built upon illustrative examples. Three experiments were conducted to investigate the cognitive mechanisms that people use to identify and describe a specific ambiguous item from among a set of ambiguous items during communication. Participants took the role of either sender or receiver in a one-way communication situation. In the role of sender they ranked a set of descriptions/attributes based on the degree to which they thought the descriptions would enable an imagined receiver to identify a specific target item from a set of ambiguous items. As receiver, they were given specific descriptions/attributes from an imagined sender, and ranked a set of ambiguous items based on which of the items they thought the sender was referring to. Experiments 1 and 2 used two different kinds of unstructured stimuli; experiment 3 utilized a structured way of manipulating unstructured/ambiguous stimulus. The results of experiments 1 and 2 were consistent with hypotheses 1 and 2. There were strong consistency between the two different stimuli and, therefore, strong evidence for generalizability of the observed effects. The results of experiment 3 gave inconsistent support for the hypotheses. The theoretical framework, the design of the experiments, and the results are discussed.