Reclaiming Water and the Right to the City in Los Angeles: Compton Commons 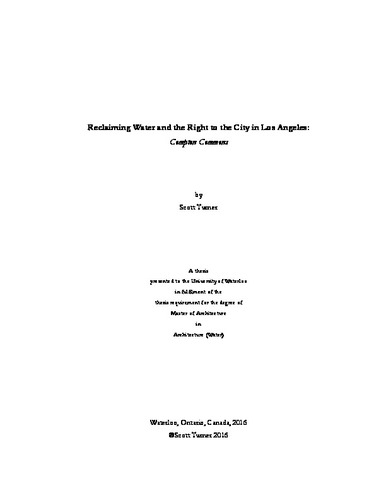 The greater Los Angeles urban area is home to nearly 19 million people, but has local water resources that can only support a population of approximately one million. Los Angeles has always depended upon a large proportion of imported water, but severe droughts within the last three years have resulted in water shortages that have critical implications for the future of the city. In addition to these water supply issues, this thesis examines larger questions of scarcity, inequity and social justice that manifest themselves in the urban fabric of Los Angeles, a city that has the least amount of parks and public spaces of any major city in North America and has been rife with inequality, racism, poverty and crime. The term ‘metabolic rift’, refers to the division between humanity and nature, and the resultant ecological crises wrought by industrial capitalism. This concept can be expanded to include all manner of socio-ecological crises produced by processes of neoliberal global capitalism. The metabolic rift is a space of exclusion and subjugation, degradation and precarity, scarcity and toxicity—an expanding territory of perpetual crisis. In examining the evolution of the urban development of Los Angeles in the context of the production of metabolic rifts and increasingly critical water scarcity, this thesis correlates the production of a capital-driven urban fabric and the expanding network of hydrological infrastructures. In this, issues of sustainability, environmental and social justice, as well as critiques of late capitalism and nature-culture discourses are interrogated. To address issues of water scarcity, this thesis proposes a strategy of tapping into the storm water sewer network of Los Angeles, channelling this water, regarded as a waste product and a hazard, and transforming it into a resource. This water will be reclaimed through a network of constructed wetlands that perform a hybrid function as storm water management and water treatment infrastructure, as well as parks and public spaces. This design proposal also includes a mixed use development in Compton that incorporates housing, community programs and a constructed wetlands park. The ambition is propose a model that can be a robust and sustainable approach to water conservation and management, as well as a space of inclusion—a productive commons outside the territory of capitalism.