Causal Models for a Quantum World 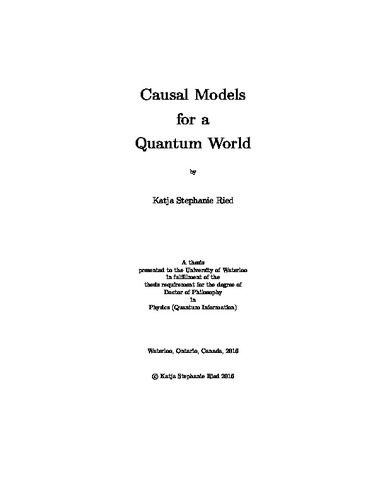 Quantum mechanics has achieved unparalleled success as an operational theory, describing a wide range of experiments to remarkable accuracy. However, the physical foundations on which it rests remain as puzzling as they were a century ago, and a concise statement of the physical principles that underlie quantum mechanics is still outstanding. One promising approach holds that these principles should be formulated in terms of information, since many of the counter-intuitive effects in quantum theory concern questions such as what one can know about a quantum system and how the information encoded therein can be processed and distributed between parties. Another challenging feature of quantum theory is its incompatibility with the other cornerstone of modern physics, general relativity. In order to reconcile the two, one must identify and retain only the essential concepts and principles of each theory, and in the case of general relativity, causality has been identified as such a concept. This raises the question of how our classical understanding of causality must change when quantum theory is taken into account. In order to address these questions about information, knowledge and causality, I turn to the framework of causal models. In classical statistics, causal models explain the relations among a set of variables in terms of causal influences, which makes them a powerful tool for structuring our knowledge about complex systems and developing strategies for interacting with them. More importantly, the framework provides the conceptual underpinnings and mathematical methods for addressing questions about causation, information and knowledge in a rigorous manner. In this thesis, I develop a version of the classical causal models framework that is compatible with quantum theory and explore its physical implications. A first step is to define quantum versions of fundamental elements such as variables, conditionals and belief propagation rules. This allows one to consider the question of what one can come to know about a quantum variable from the point of view of causal modelling. The conditionals relating quantum variables are found to have a richer structure than their classical counterparts, which can be exploited for the task of discerning causal relations given limited data -- a central problem in classical causal modelling. The mathematical properties of quantum conditionals also establish a correspondence between various classes of two-party correlations, such as bound and distillable entanglement, and the types of causal structures that can give rise to them, which may become a useful tool for entanglement theory and quantum information processing. In the context of open quantum systems dynamics, quantum causal models provide a clear physical explanation of not completely positive maps and, more broadly, of non-Markovian quantum dynamics. Finally, I consider the possibility of non-classical effects in the way that different causal mechanisms are combined -- that is, non-classical causal structures. For the simple case of two causally ordered variables, I propose indicators that witness different classes of combinations of causal mechanisms, including a non-classical mixture, and describe an experiment realizing examples of the different classes. As these results illustrate, the framework of quantum causal models provides both greater conceptual clarity and a comprehensive mathematical formalism for studying a diverse set of problems, ranging from foundational questions to applications in open systems dynamics and the exploration of non-classical causal structures, which are likely to feature in a future theory of quantum gravity. The material presented in this thesis is intended as a foundation and inspiration for further applications of quantum causal models.