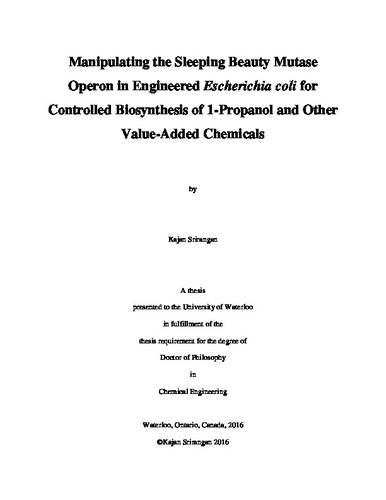 A great fraction of the world’s energy requirements are presently met through the unrestricted use of fossil-derived fuels. However, due to the anticipated demise of these energy sources and the environmental and socioeconomic concerns associated with their use, a recent paradigm shift is to displace conventional fuels with renewable energy sources. Although most resources in biofuels have been directed towards the implementation of bioethanol platforms, the advanced alcohol 1-propanol has recently received significant attention as a promising alternative biofuel. Compared to that of ethanol, 1-propanol has an energy density that is more comparable to gasoline and is far less hygroscopic and volatile. Nevertheless, no microorganism has been identified as a natural 1-propanol producer. Accordingly, in this thesis, we manipulated a novel metabolic pathway for the synthesis of 1-propanol in the genetically tractable bacterium Escherichia coli. E. coli strains capable of producing 1-propanol were engineered by extending the dissimilation of the tricarboxylic acid intermediate succinate to the C3 biogenic precursor propionyl-CoA. This was accomplished by activation of the dormant yet extant Sleeping beauty mutase operon genes (i.e. sbm-ygfD-ygfG). In our initial studies, we developed propanogenic E. coli strains by episomally expressing selection of key genes, i.e. (1) three native genes in the sleeping beauty mutase (Sbm) operon (2) the genes encoding bifunctional aldehyde/alcohol dehydrogenases (ADHs) from various microbial sources, and (3) the sucCD gene encoding succinyl-CoA synthetase from E. coli. Using these triple-plasmid expression systems in E. coli, production titers up to 150 mg/L of 1-propanol were obtained in laboratory shake-flask growths under strict anaerobic conditions using glucose as the major carbon source. Following the development of these plasmid-haboring propanogenic E. coli hosts, we systematically explored various biochemical, genetic and metabolic/physiological factors to potentially enhance 1-propanol production and productivity. It was found that 1-propanol production can be significantly improved in a bioreactor under anaerobic conditions by using glycerol as a carbon source using a single-plasmid system solely expressing the Sbm operon genes. This may in part be due to the high reductance degree of glycerol compared with the microbial cell biomass. Equally important, we also alleviated plasmid-induced metabolic burden by chromosomally activating the Sbm operon genes. This plasmid-free propanogenic strain allowed high-level coproduction of 1-propanol and ethanol (accounting for 85 % of dissimilated carbon) under anaerobic fed-batch cultivation using glycerol as the major carbon source. To expand the chemical diversity and utility of our plasmid-free propanogenic E. coli strains, we explored the possibility of producing other value-added chemicals of biotechnological relevance derived propionyl-CoA. We first examined the possibility of producing butanone, an important commodity ketone. To produce butanone, we developed a modular CoA-dependent chain elongation platform to fuse Sbm-derived propionyl-CoA and endogenous acetyl-CoA to form the C5 biogenic precursor 3-ketovaleryl-CoA. Next, 3-ketovaleryl-CoA was channeled into the clostridial acetone-formation pathway for thioester hydrolysis and subsequent decarboxylation. In also manipulating initial glycerol dissimilation in the engineered ketogenic E. coli strains, we achieved co-production of 1.3 g/L butanone and 2.9 g/L acetone under semi-aerobic batch cultivation with glycerol as the major carbon source. In our final study we investigated the feasibility of using our developed propanogenic strains for the production of the bio(co)polymer poly(3-hydroxybutyrate-co-3-hydroxyvalerate) using unrelated carbon sources glycerol or glucose. (i.e. without exogenous supplementation of propionate or valerate). P(3HB-co-3HV) producing propanogenic strains were developed by first fusing two acetyl-CoA moieties or acetyl-CoA and propionyl-CoA generate the C4 and C5 thioesters 3-hydoxybutyryl-CoA and 3-ketovaleryl-CoA, respectively via a CoA-dependent chain elongation platform. Next, the resulting C4 and C5 thioesters intermediates were channeled into a polyhydroxyalkanoate biosynthetic pathway for subsequent thioester reduction and polymerization. In modulating various carbon sources, aeration regimes, and host-gene deletions, copolymers with 3HV fractions ranging from ~3 mol% to ~19 mol% were obtained. Taken together, we have demonstrated that activating the Sbm operon not only transforms E. coli to be propanogenic, but also introduces an intracellular “flux competition” between the traditional C2-fermentative pathway (i.e. acetate and ethanol) and the novel C3-fermentative pathway (i.e. propionate and 1-propanol). Harnessing this flux and employing various modular chain elongation and pathway enzymes can open the avenue for the controlled production of various odd-chain organic acids, medium chain ketones, bio(co)polymers and other oleochemicals. Accordingly, the developed propanogenic E. coli strains and associated genetic and metabolic tools reported here expands the classes of chemicals that can be produced microbially via propionyl-CoA.