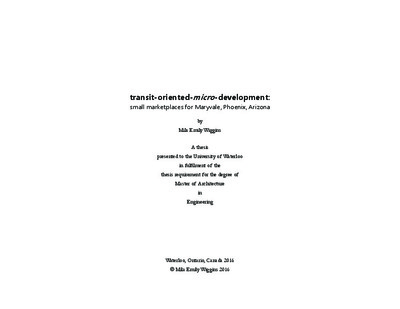 Phoenix, Arizona is consistently ranked as one of America’s fastest growing cities. This growth is attributed to pervasive suburban expansion. Since the Second World War, Phoenix’s population has increased by fourteen times to become one of America’s largest cities. Despite this expansion, mass rapid transit was non-existent in post-war Phoenix until 2008. In the 1980s and 1990s, several proposals for mass rapid transit strategies were abandoned as tax increases required for funding were rejected by Phoenix residents. Finally, in 2000 the Transit2000 proposal that promised light rail transit and improved bus service was approved by residents. The scheme initiated the construction and planning of Phoenix’s light rail system, the inaugural central line opened in December 2008 with several future expansion lines planned. The scheme also implemented a transit-oriented-development strategy for the Central City in order to densify and revitalize its urban core. Since the plan was approved, an estimated $8.2 billion has been invested in developments along the main light rail corridor. Unfortunately, as the developments attract new residents and visitors to the city centre, property costs increase threatening the displacement of the city’s lower income population, a demographic most dependant and therefore most able to benefit from improvements to the transit system. With developments and improvements concentrated along the thin central line, the vast majority of Phoenix residents are unable to benefit from these changes including many of its inner city communities that are home to its most marginalized and underserved residents who are most dependant on public transportation. Beyond the limitations of the public transport system, recent immigration legislation in Arizona has also greatly affected the everyday circumstances of some of Phoenix’s most underserved communities. While the policies enforce increased surveillance of undocumented migrants, they are criticized for their potential to simultaneously racially profile those of Latin American ethnicity. This has created an atmosphere of fear for both migrants and Latin Americans to the extent that many evade public space and thus only exist in the shadows, hidden and invisible from normal, typical, everyday life. This thesis examines the potential of transit and its associated development in benefitting its most underserved and undervalued patrons – minorities of income, ethnicity, and status. From examining embedded issues including designing in the suburbs, micro retail environments, ethnic enclaves, visibility and anonymity, the thesis proposes the transit-oriented-micro-development, small marketplaces that can benefit the marginalized in Maryvale, Phoenix, Arizona.