Writing the Self: An Examination of Self-narration and Identity Construction in Alina Bronsky’s Scherbenpark and Julya Rabinowich’s Spaltkopf 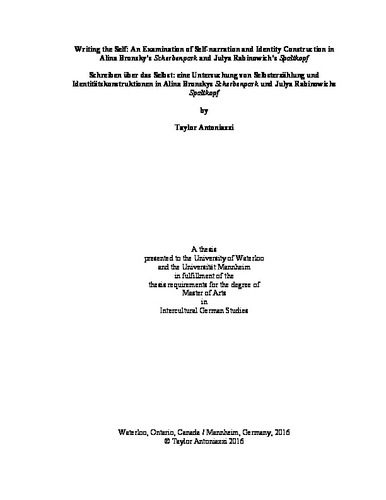 Through a close reading of Alina Bronsky’s Scherbenpark (2008) and Julya Rabinowich’s Spaltkopf (2008), this thesis examines the process of identity building as it is articulated and produced in self-narration. The goal of this discussion is to demonstrate the potential for the young, female protagonists in these texts to reclaim a sense of agency by taking command over the story of the self and constructing transcultural identities across the span of a life that transcends dislocation, trauma and loss. Telling their identities offers the protagonists an opportunity to recover the autonomy they felt they had lost in the context of migration, of the family or of adolescent development. When these narrators negotiate their identities, they resist binary identifications based on country or language of origin and explode singular and universal understandings of migration experience and gender. Instead they write identities that are performative, diverse, and multiple. The first chapter outlines the research questions this thesis seeks to address: What subject positions do the protagonists of these texts negotiate for themselves in the processes of traveling and telling? What role does gender play in the formation of identity? And to what extent may strategies of self-narration be deployed to produce a particular subjectivity? The second chapter analyzes the existing body of scholarship surrounding these texts. In a departure from previous studies, I pry apart the constellation of author and narrator and demonstrate what we can learn by disassociating the texts from authorial biography. In order to establish a theoretical and methodological foundation, the third chapter draws on the work of Paul Jay on transnationalism in literary studies, Michael Bamberg on identity and narration and Judith Butler’s theory of gender performativity. The fourth chapter examines the role played by narrative manipulation strategies and gender performativity in Scherbenpark. By appropriating codes of masculinity, the protagonist signals her refusal to conform to traditional femininity and be a passive victim who is written or controlled by someone else. From here, I turn to an analysis of Spaltkopf in chapter five. Through literary strategies like fragmentation, focalization, intertextuality and the use of myth, the protagonist moves freely between fixed identifications, reconstructing and reinterpreting her experiences and drawing lessons from them, which she uses to build a transcultural sense of being that revels in unhomeliness and uprootedness. Finally, in the concluding chapter, I suggest that these texts may productively be read as emancipatory and exploratory sites at the boundary between becoming and being, in which the protagonists are engaged in perpetual travel in-between locations, languages, cultures and identity positions.

Taylor Antoniazzi (2016). Writing the Self: An Examination of Self-narration and Identity Construction in Alina Bronsky’s Scherbenpark and Julya Rabinowich’s Spaltkopf. UWSpace. http://hdl.handle.net/10012/10383