Preschoolers’ reasoning about the “how”, “what” and “when” of ownership. 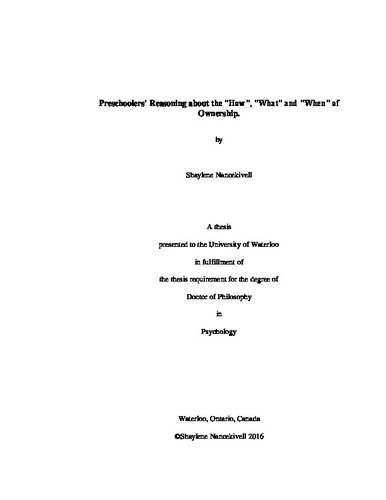 My dissertation includes three papers. Paper one investigates preschoolers’ appreciation of how people become owners. In two experiments, 70 3-to-5-year-olds were asked to explain why a character owns, likes, or uses certain objects. Four- and five-year-olds, but not three-year-olds, used past events of buying, giving and finding to explain ownership demonstrating an appreciation of how property is typically acquired. Four- and five-year-olds generated such explanations even though they never saw these past events happen. Thus, these findings also have implications for children’s ability to infer history in their explanations. Paper two examines children’s understanding of what ownership entitles owners to do with their property. In this study, 128 children aged 4 to 6 were asked what a person was allowed to do with an object that belonged to the person, belonged to no-one, or belonged to someone else. Children were allowed to provide as many responses as they wished. Their responses reflected an appreciation that ownership affects a wide range of object uses including harmless object use. The pattern of children’s responses also suggested that they view ownership as restricting non-owners from using property, rather than affecting use by entitling owners. Paper three investigates the influence of ownership on young children’s reasoning by examining when preschoolers use ownership to explain acceptability. In this study, 323 3- to 5-year-olds were asked to explain acceptable and unacceptable actions. In Experiments 1 and 2, ownership was not mentioned to children before they generated their explanations. In these experiments, older preschoolers but not younger preschoolers spontaneously referenced ownership more than alternative considerations in their explanations. In Experiment 3, ownership was mentioned to children before they generated their explanations. In this experiment, younger preschoolers frequently referenced ownership when explaining unacceptability, but not when explaining acceptability. Together these findings suggest that ownership is influential in preschoolers’ reasoning about the acceptability of using objects, but that the scope of its influence increases with age. My dissertation concludes with a discussion of the broader implications of my findings for children’s reasoning about ownership.