Investigating the Effect of Pace Mechanic on Player Motivation and Experience 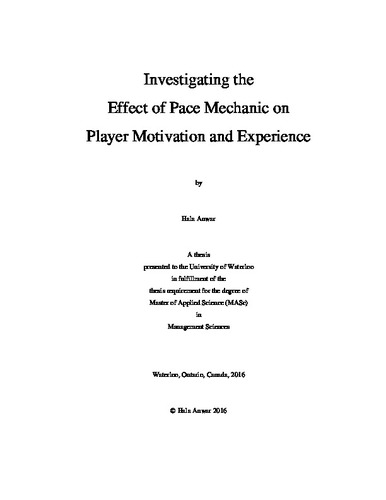 Games have long been employed to motivate people towards positive behavioral change. Numerous studies, for example, have found people who were previously disinterested in a task can be enticed to spend hours gathering information, developing strategies, and solving complex problems through video games. While the effect of factors such as generational influence or genre appeal have previously been researched extensively in serious games, an aspect in the design of games that remains unexplored through scientific inquiry is the pace mechanic—how time passes in a game. Time could be continuous as in the real world (real-time) or it could be segmented into phases (turn-based). Pace mechanic is fiercely debated by many strategy game fans, where real-time games are widely considered to be more engaging, and the slower pace of turn-based games has been attributed to the development of mastery. In this thesis, I present the results of an exploratory mixed-methods user study to evaluate whether pace mechanic and type of game alter the player experience and are contributing factors to how quickly participants feel competent at a game. 36 participants were invited to play one session of a real-time game and one session of a turn-based game, and asked to provide feedback about their experience. The results of the study highlight some of the differences between these two pace mechanics. Drawing inspiration from previous work in game design, these differences are then used to present implications for the design of games for both play and serious tasks (e.g., educational games).