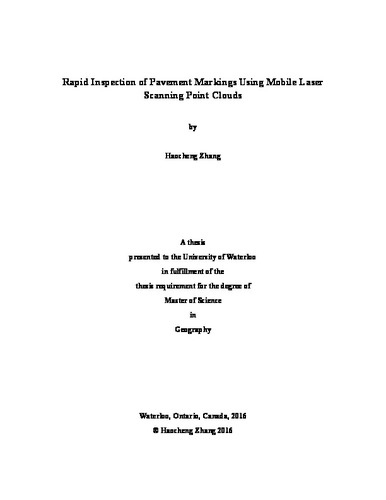 Intelligent Transportation System (ITS) is the combination of information technology, sensors and communications for more efficient, safer, more secure and more eco-friendly surface transport. One of the most viable forms of ITS is the driverless car, which exist mainly as prototypes. Serval automobile manufacturers (e.g. Ford, GM, BMW, Toyota, Tesla, Honda) and non-automobile companies (e.g. Apple, Google, Nokia, Baidu, Huawei) have invested in this field, and wider commercialization of the driverless car is estimated in 2025 to 2030. Currently, the key elements of the driverless car are the sensors and a prior 3D map. The sensors mounted on the vehicle are the “eyes” of the driverless car to capture the 3D data of its environment. Comparing its environment and a pre-prepared prior known 3D map, the driverless car can distinguish moving targets (e.g. vehicles, pedestrians) and permanent surface features (e.g. buildings, trees, roads, traffic signs) and take relevant actions. With a centimetre-accuracy prior map, the intractable perception problem is transformed into a solvable localization task. The most important technology for generating the prior map is Mobile Laser Scanning (MLS). MLS technology can safely and rapidly acquire highly dense and accurate georeferenced 3D point clouds with the measurement of surface reflectivity. Therefore, the 3D point clouds with intensity data not only offer the detailed 3D surface of the road but also contains pavement marking information that are embedded in the prior map for automatic navigation. Relevant researches have been focused on the pavement marking extraction from MLS data to collect, update and maintain the 3D prior maps. However, the accuracy and efficiency of automatic extraction of pavement markings can be further improved by intensity correction and window-based enhancement. Thus, this study aims at building a robust method for semi-automated information extraction of pavement markings detected from MLS point clouds. The proposed workflow consists of three components: preprocessing, extraction, and classification. In preprocessing, the 3D MLS point clouds are converted into the radiometrically corrected and enhanced 2D intensity imagery of the road surface. Then the pavement markings are automatically extracted with the intensity using a set of algorithms, including Otsu’s thresholding, neighbour-counting filtering, and region growing. Finally, the extracted pavement markings are classified with the geometric parameters using a manually defined decision tree. Case studies are conducted using the MLS datasets acquired in Kingston (Ontario, Canada) and Xiamen (Fujian, China), respectively, with significantly different road environments by two RIEGL VMX-450 systems. The results demonstrated that the proposed workflow and method can achieve 93% in completeness, 95% in correctness, and 94% in F-score respectively when using Xiamen dataset, while 84%, 93%, 89% respectively when using Kingston dataset.