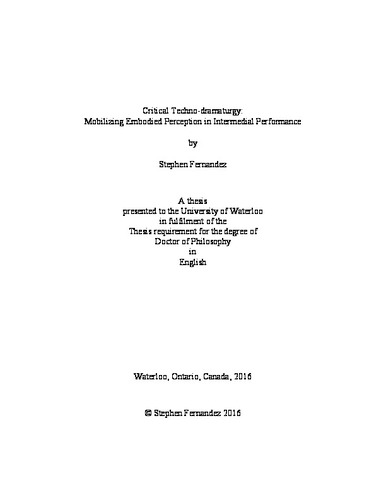 This dissertation attends to the ways in which the deployment of technological devices in twenty-first-century intermedial performance might influence the audience members’ perception of the relationship between humans and technology. Drawing upon the work of scholars in the fields of new media, performance studies, and the philosophy of technology, I argue that intermedial performance artists reinvigorate the role of the human body in performance by mobilizing embodiment as a techno-dramaturgical strategy for shaping the audience members’ perception of human-machine interaction. Chapter One surveys the history of performance and technology from the ancient Greek theatre to twentieth-century performance, with particular emphasis on the conceptual significance of techne and poiesis in dramatic theatre. Chapter Two examines the theories of intermediality in performance as well as the co-evolutionary relationship between human beings and technicity in order to delineate the analytical and dramaturgical potential of an original conceptual framework known as critical techno-dramaturgy. Chapter Three explores the interplay between embodiment, technology, and space in intermedial performance and its effects on the audience members’ awareness of their embodied existence as they navigate the cityscape with bicycles, handheld computers, and mobile phones. Chapter Four investigates the intersection of performance and techno-anxiety by looking at how intelligent machines that appear to perform autonomously might affect the audience members’ perception of these anthropomorphic technological agents in relation to their own bodies. Chapter Five examines how the construction of the “cyborg” as both a conceptual metaphor for and a material instantiation of human-machine “fusion” could impact the prosthetic relations between persons with disabilities and the technological devices that they employ in intermedial performance. Finally, Chapter Six looks at my involvement in the production of an original creative project that uses critical techno-dramaturgy as a strategy for shaping the audience members’ perception of the complicity between digital media (particularly video technology) and the mediation of death.