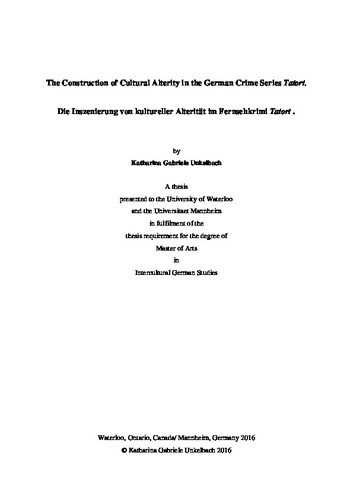 This thesis looks at the production of cultural alterity in the German crime series Tatort. It focuses on the episodes Wem Ehre gebührt (2007), Baum der Erlösung (2009) and Familienaufstellung (2009) which all deal with German-Turkish migrants living in Germany. The goal is to show how narration and cinematographic elements (cut, shot, angle and color) serve to manipulate the perception of cultural foreignness. When analysing narration, the focus lies on two striking symbols of cultural alterity: the so called ‘honor-killing’ and the muslim headscarf. The crime series being analyzed reveal that these symbols firstly serve to perpetuate cultural stereotypes and secondly increase the perception of difference and irreconcilability between the German and Turkish culture.