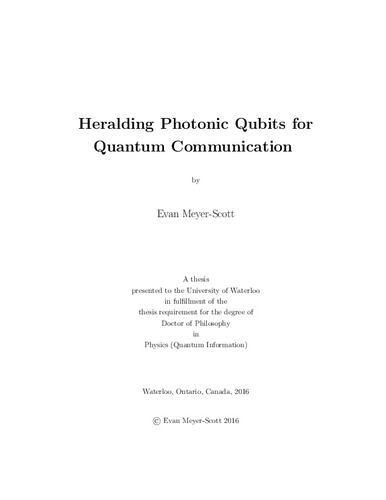 Quantum communication attempts to harness the unique rules of quantum mechanics to perform communication tasks that are difficult or impossible using classical rules. To realize these benefits, information must be carried on quantum systems. Photons make excellent carriers because they interact very little with the environment, move quickly, and can naturally store quantum information in their polarization. However, it is notoriously difficult to detect a single photon without destroying it. Standard detectors simply absorb the photon, losing the quantum information. This is a critical outstanding problem in quantum communication, as advanced protocols need to know exactly when a photon has arrived at a receiver after transmission through the atmosphere or an optical fibre before performing further quantum-information-processing tasks. Certifying a photon’s presence is of particular interest in tests of Bell’s inequalities, which have only recently been performed without loopholes arising from photon loss, and in device-independent quantum cryptography, which relies on such Bell tests for security. In this thesis, I first present work on directly reducing losses in a successful loophole-free Bell test. This is an extremely difficult task that cannot be extended for long-distance communication. Therefore I then focus on ways to circumvent loss by detecting photons without destroying them while preserving their quantum information. First I analyze theoretically a way to herald photons using only linear-optical elements (beam splitters and phase shifters) and extra ancilla photons. Similar but older methods have been demonstrated experimentally by other groups, and my improvements will help future advanced quantum communication protocols. The main experiment in this thesis certifies the presence of a photon in a rather simple way: split the photon into two using a nonlinear optical crystal, then detect one of the pair to herald the other. I show in this first proof-of-principle experiment that photonic qubit precertification indeed preserves qubit states, with up to (92.3 ± 0.6)% fidelity and rates of 1100 events per hour. With reductions in detector dark counts, precertification could outperform direct transmission, even with extremely lossy fibre links. Finally, I present two sources of photons based on nonlinearities in optical fibres. One of the limitations of the photon splitting scheme for heralding is the low success probability due to the very low likelihood of splitting a photon in two. In these fibre photon sources I investigate increasing the splitting likelihood in four-wave mixing through advanced materials and fibre designs. I use polarization-maintaining fibres to generate entangled photon pairs as a prerequisite to precertification, with (92.2 ± 0.2)% fidelity to a maximally-entangled state. Then I show that one type of highly nonlinear chalcogenide glass, never before used for photon pair generation, could outperform standard nonlinear crystals by two orders of magnitude, with calculated conversion efficiency up to 10^-3. To approach the single photon regime, I generate photon pairs in chalcogenide microwires with pump powers as low as 480 nW and verify their timing correlations. These advances demonstrate the capability of nondestructive precertification of photons to allow advanced quantum communications protocols even over long distance, and could lead to the first implementations of fully device-independent quantum cryptography.