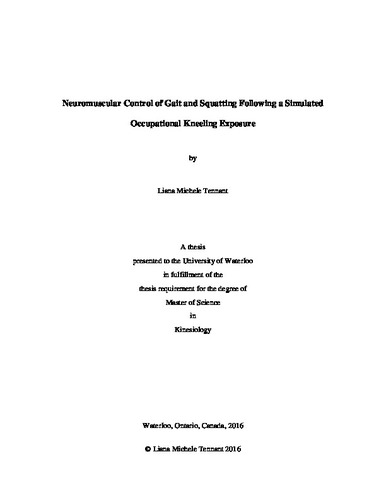 Frequent and prolonged occupational high knee flexion postures such as kneeling and squatting are associated with an increased risk for the initiation and development of knee osteoarthritis. In order to reduce the prevalence of knee osteoarthritis in this population, a better understanding of the link between these postures and the onset of joint degeneration is needed. The goal of this thesis was to investigate the effects of a 30-minute simulated occupational kneeling exposure on the mechanics of gait and squat transitions, as well as knee joint proprioception, in order to evaluate any negative adaptations that may be associated with an increased risk for knee osteoarthritis development. It was expected that increased joint loading during gait following the kneeling exposure would be linked to deficits in proprioceptive acuity. Greater frontal plane knee motion during squat transitions was also hypothesized. These hypotheses were based on the concept that a prolonged kneeling exposure may induce proprioceptive and neuromuscular control changes by way of ligamentous creep, muscle stretch, pain, or joint capsule deformation. Forty healthy, young participants volunteered for this study (20M, 20F, age: 21.4 ± 2.5 years, height: 1.69 ± 0.10 m, mass: 68.8 ± 16.1 kg). Vastus medialis muscle activity was recorded with surface electromyography, external ground reaction forces were collected using force plates, and 3D lower limb kinematics were measured using an active motion capture system. A knee joint position sense task was used to evaluate proprioception. Gait was evaluated in both an unloaded condition and a loaded condition. In the loaded condition, participants carried a load normalized to 20% of their body mass in a crate held in both hands in front of the torso to simulate how loads are carried occupationally. Participants also performed squat transitions at both a slow and a fast pace. Participants then completed a 30-minute simulated occupational kneeling exposure, following which proprioception, gait, and squatting measures were re-collected. All values were collected for a third time, 30 minutes from the time the kneeling exposure ended. The kneeling exposure resulted in a significant increase in both the peak and mean knee frontal plane motion during the squat transition. The average baseline values for both peak and mean absolute frontal plane knee deviation (peak: 0.207 m (SD 0.110 m); mean: 0.084 m (SD 0.048 m)) were significantly smaller than post-kneeling values (peak: 0.229 m (SD 0.107 m), p = .0057; mean: 0.091 m (SD 0.048 m), p = .0186). The knee joint was still deviated during squat transitions 30 minutes post-kneeling (peak: 0.227 m (SD 0.108 m), p = .0267; mean: 0.093 m (SD 0.049 m), p = .0061). During gait, vastus medialis activation onset was delayed with respect to initial contact following the kneeling exposure (pre: -0.159 s (SD 0.034 s); post: -0.152 s (SD 0.035 s), p = .0004; 30post: -0.148 s (SD 0.032 s), p = .0003); however, the biological significance of this small change in activation onset is questionable. The kneeling protocol did not elicit a change in knee proprioception, or in the measures of external loading evaluated during gait. Greater frontal plane knee motion following the kneeling exposure suggests a negative adaptation in movement control that may act to increase the risk of traumatic joint injury that could lead to secondary knee osteoarthritis. The lack of change in proprioceptive acuity implies that changes in knee joint position sense are not responsible for the observed change in squat control. In addition, the dynamic kneeling exposure used in the current study seems to reduce the potential for inducing adaptations in motor control during gait. This reasoning is based on a comparison to previous work that found alterations in gait mechanics following a 30-minute static full-flexion kneeling exposure. Further research is needed on the effects of prolonged and cyclic kneeling on ligamentous creep, joint laxity, and neuromuscular control during gait, as well as other occupationally relevant tasks such as squat transitions.