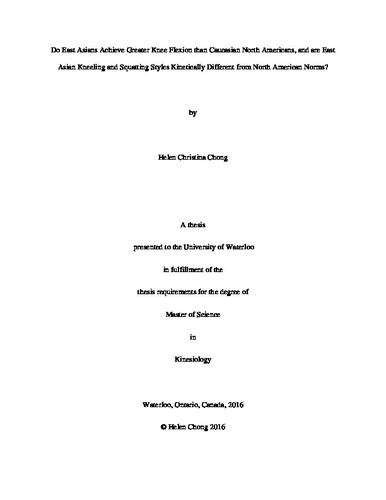 High flexion postures (specifically, kneeling and squatting) are used with greater regularity in East Asian (Chinese, Japanese, Korean, and Vietnamese) cultures for many activities of daily living (ADL). Furthermore, the favored style of kneeling and squatting is different between ethnicities: Caucasians typically flex their forefoot while kneeling and squatting, whereas East Asians tend to keep the top or bottom of the foot flat to the ground. Most, but not all, research suggests that East Asians are able to achieve a greater knee flexion angle during high flexion postures, but it is unknown if any differences between ethnicity extends to kinetic outcomes. A direct comparison between ethnicities with respect to kinetics has not been made. Where a difference in maximal attainable flexion angle exists, it is unclear whether the cause is cultural or innate. Therefore, this thesis project aimed to answer three related questions: 1) Do East Asian populations achieve a greater flexion angle than North American Caucasians; 2) If there is in fact a difference, is it a result of cultural upbringing or innate ability?; and, 3) Do different styles of kneeling and squatting alter the moments of force at the knee? To accomplish these aims, 43 participants were recruited from the University of Waterloo and fit into one of three groups: Caucasian, born and raised in North America (20 participants); East Asian, born and raised in North America (18 participants); or, East Asian, born in East Asia, living in North America for less than two years (five participants) (however, the East Asian born in East Asia group was excluded from statistical processing since the group size was considerably smaller). Kinetic, kinematic, neuromuscular, and passive range of motion data were collected and compared between different ethnicity groups. East Asians did not achieve a greater mean knee flexion angle during kneeling compared to Caucasians (Canadian born East Asians=152.01° (±4.85°); Caucasians=153.07° (±7.46°), p=0.2859), but a greater mean flexion angle was found during squatting (Canadian born East Asians =147.96° (±6.62°); Caucasians = 141.69° (±17.48°), p=0.0014). Between Caucasians and Canadian born East Asians, there was also no difference in peak knee flexion angle during passive range of motion testing (Canadian born East Asians = 152.05° (±8.16°); Caucasians = 149.54° (±7.75°)), which indicates that there is no difference in ability to achieve greater high flexion between groups. Finally, it was found that different styles of squatting altered the kinetics at the knee, but different styles of kneeling were not significantly different. Flat foot squatting, a posture more commonly seen in East Asian cultures, had significantly (p<0.05) lower flexion and adduction moments at the knee than heels raised squatting (which is more commonly used by Caucasian North Americans) during descent, ascent, and static squatting. The mean static flexion moment (which is similar in magnitude to the peak flexion moment during descent and ascent) for flat foot squatting was 4.37 (±1.47) %BW*Ht, and for heels raised squatting was 5.99 (±1.84) %BW*Ht. The mean static frontal plane moment for flat foot squatting was -0.45 (±1.33) and for heels raised squatting was 0.59 (±1.02). (Negative values indicate an external abduction moment and positive values indicate an external adduction moment.) When performing high flexion postures, reduced knee moments are desirable since higher moments are associated with greater joint loading and injury risk.