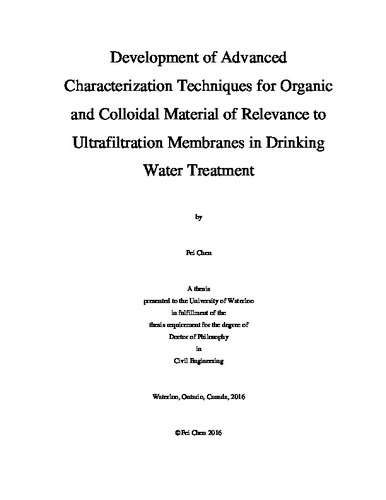 Ultrafiltration (UF) membranes, which can effectively remove colloidal/particulate matter (C/P), macromolecules, and pathogenic microorganisms, have gained increasing acceptance in the drinking water industry. However, organic fouling becomes a significant obstacle in achieving widespread adoption of this advanced treatment technology as it is a major contributor to operational and maintenance problems. Biofiltration without prior coagulation has been identified as a “green” and effective pre-treatment technique to mitigate organic fouling and increase the sustainability of ultrafiltration operation. To achieve the adoption and enhance the commercialization potential of biofiltration as a pre-treatment alternative, there is a need to identify and develop approaches to better characterize the natural organic matter (NOM) components that contribute to UF fouling and develop a fundamental understanding of the fouling mitigation mechanism of biofiltration as a new UF pre-treatment process. For the first phase of this research, a pilot-scale study of drinking water UF membrane fouling illustrated the utility of liquid chromatography-organic carbon detection (LC-OCD) and fluorescence excitation emission matrices (FEEM) combined with principal component analysis (PCA) for the NOM-C/P characterization and fouling behaviour investigation. Biopolymers and protein-like substances were identified as the key contributors to both hydraulically reversible and irreversible fouling. However, the lower molecular weight (MW) NOM fraction, humic-like substances, were shown to contribute little to UF fouling at low fouling rates. In addition, the capability of colloidal/particulate matter to alleviate the hydraulically irreversible fouling was highlighted. This study also illustrated the complementary nature of LC-OCD (size exclusion based) and FEEM (functional group composition based) with regard to NOM-C/P characterization. To further explore the physical significance of extracted principal components from FEEM-PCA, a model compound investigation using humic acid, bovine serum albumin, sodium alginate, and silica was conducted. It was found that both intrinsic fluorescence properties of a particular NOM/inorganic colloid component and their interactions with other components were included within the physical significance of each principal component (PC). Then, the differences in the principles and utility of PCA and other FEEM data analysis methods were compared. It is recommended that PCA should be used for the investigation of the possible effects of the NOM component of interest whereas PARAFAC and peak picking are more promising for investigation of the characteristics of NOM components. In addition, FEEM-PCA is capable of extracting information from Rayleigh scattering regions which could be related to colloidal/particulate matter and this unique utility was shown to not be affected by the photomultiplier tube voltage settings which can influence the saturation of the signal. Meanwhile, the compositional characteristics of biopolymers (defined by LC-OCD) was studied using a newly developed approach, LC-OCD based fractionation was combined with NOM characterization techniques. For three different biopolymer sources (biofilter media biofilm extracellular polymeric substance (EPS) extracts, a municipal wastewater, and a river water), the lower MW biopolymer sized fractions was found to have higher protein content per biopolymer carbon mass and the normalized organic nitrogen (ON) concentration was shown to be a reliable parameter to distinguish different sources. The behaviour and kinetics of NOM-C/P component removal during biofiltration was investigated at pilot-scale to understand the mitigation mechanisms of biofiltration as a pre-treatment alternative for UF. Biofiltration was demonstrated to be a promising process to remove protein-like materials and biopolymers which were identified as the key UF foulants. Comparatively, biofiltration had limited performance for the control of lower MW NOM fractions such as humic substances and building blocks. Either first or second order kinetics was shown to be appropriate to model the removal of biopolymers and protein-like materials during biofiltration. Also, because of the interaction between protein-like materials and colloidal/particulate matter, the 0.45 μm pre-filtration with polymeric filter prior to FEEM measurements resulted in a reduction of protein-like fluorescence intensities, with less of an effect on humic-like substances. Additionally, the differences of the removal behavior and kinetics of NOM components between filtered and non-filtered samples were observed. In summary, biofiltration was demonstrated to be a reliable drinking water treatment process to remove key UF foulants and can therefore be recommended as a promising pre-treatment alternative for UF fouling control. LC-OCD and FEEM based techniques could be used in combination for NOM-C/P characterization and monitoring to better investigate the behavior of various NOM-C/P components. The selection of FEEM data analysis methods should be determined based on the purpose of investigation. FEEM measurements on both filtered and non-filtered samples are recommended to extract more information on colloidal/particulate NOM components. Further investigations should be conducted to explore the properties of other fluorescent NOM fractions using the newly developed fractionation approach and to achieve a more definitive interpretation on the removal kinetics of various NOM-C/P components during biofiltration.