Condos in the Suburb: What are the Drivers Behind the Decision to Move into Suburban Condominiums? 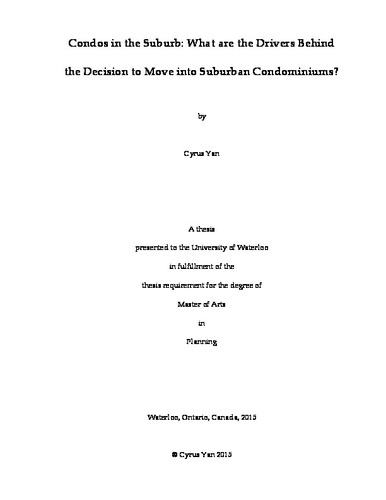 High-rise residential condominiums are increasingly utilized by suburban municipalities in Canada as an alternative to suburban sprawl for accommodating population growth. Despite its increasing adoption, little research exists to support the effectiveness of this growth management tool, and a key indicator of its success is on whether its suburban condo dwellers exhibits a consumption pattern and lifestyle that are more urban in character. This study offers a comparative analysis on the lifestyles and motivations of suburban condominium dwellers, their respective municipalities, and condominiums clusters located in the downtowns of Toronto and Vancouver. It finds that the suburban ‘condo boom’ is fueled by a transient population characterized by tenuous socio-demographic status, childless and small households, and is currently not in a position to replace lower density forms of housing. In addition, the characteristics indicative of an urban form of living, namely that of reduced land consumption and auto-dependency, and increased levels of active transportation and public transit use, are either absent or only realized to a limited degree. The problems of how to ensure larger, relatively affordable condominium units, and how to enhance the transit-supportiveness of the suburban downtown are distilled from the findings as key issues to overcome, and five recommendations are made to address them.

Cyrus Yan (2016). Condos in the Suburb: What are the Drivers Behind the Decision to Move into Suburban Condominiums?. UWSpace. http://hdl.handle.net/10012/10116