In Danger? An Exploration of Canadian Truck Drivers’ Health through the Canadian Community Health Survey 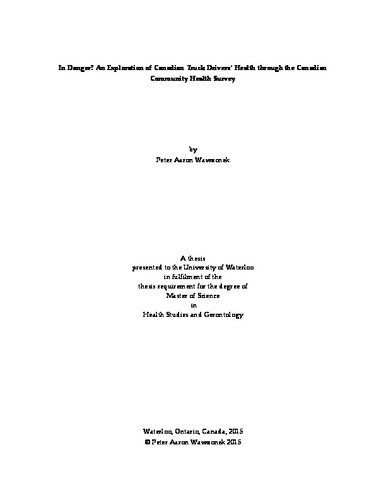 Background: There exists substantive evidence showing that the health status of truck drivers from the United States (US) is much poorer than the general US population. Comparatively there is much less research on Canadian truck drivers, however the macroergonomics of the motor carrier industry in both countries makes it challenging for drivers to maintain a healthy lifestyle. Thus Canadian truck drivers may also be at risk for poor health outcomes. The objectives of this thesis are threefold; to: (1) estimate the prevalence of chronic diseases in Canadian truck drivers and determine if the prevalence rates are higher than in the Canadian population, (2) identify and quantify the risk factors for chronic diseases in Canadian truck drivers, and (3) elucidate the variables that significantly correlate to BMI in Canadian truck drivers. Methods: A sample of 991 male truck drivers was compared to 29,958 male respondents of a similar demographic profile in the Canadian Community Health Survey (CCHS) from 2009-2010 (Cycle 5.1). The samples were comprised of those who were aged 18-65, worked 10-130 hours a week, had an income of at least $20,000, and had a Body Mass Index less than 60. The sample was restricted to males since female truck drivers make up less than 5% of the truck driver population, and there would be an insufficient sample size of female truck drivers to generate statistically sound confidence intervals. Furthermore female truck drivers have similar morbidities when compared to males. Cycle 5.1 of the 2009-2010 CCHS was used as this was the last year that occupation was measured in the CCHS. The reporting of occupation made this analysis on truck drivers possible. The CCHS is a cross sectional design survey which had a multi-stage stratified clustering sample design which obtained samples from all health regions of Canada. Chi-squared and regression analyses were performed, following bootstrapping and application of sample weights. Results: When compared to other working males in the CCHS, male truck drivers had an adjusted Prevalence Ratio (PR) of 1.45 (p<0.05) for heart disease, thus male truck drivers were 1.45 times as likely to report having heart disease as compared to other male workers. Prevalence ratios reported were adjusted for age, hours worked per week, household income, marital status, and education, as these were significantly different between populations in the Chi Square analysis. Truck drivers also had other adjusted PRs with p<0.05; higher BMI (PR of 1.69 for being obese, and 1.45 for being overweight, versus having a BMI in the normal range) higher amphetamine usage (PR of 2.04 for reporting usage “More than once” versus no usage), lower seat belt usage (PR of 5.99 for reporting using a seatbelt “Rarely” or “Never” versus “Always” or “Most of the Time”), higher rates of smoking (PR of 1.49 for being a daily smoker versus never smoking), high rates of fatigue (PR of 2.74 for the reported frequency of driving while tired being “Often” versus “Never”), lower levels of physical activity (PR of 0.52 for being active [versus inactive]) and lower fruit/vegetable intake (PR of 0.76 for reporting consuming 5-10 fruits/vegetables per day vs less than 5 fruits/vegetables per day). Although these prevalence ratios were expected based upon the literature review, some findings were unexpected: truck drivers lower prevalence ratios for frequency of having 5 or more drinks, prevalence of mood disorders, and self-perceived work stress and self-perceived life stress. Linear regression analysis on BMI was performed, elucidating that smoking status and daily physical activity over 15 minutes long significantly explained the variation in BMI; the more one smoked and the more active one was, the lower their predicted BMI was. Conclusion: This sample of truck drivers was markedly different from other employed Canadian workers with respect to chronic disease prevalence and overweight status. Findings, such as the relationship between smoking, physical activity and BMI, will be useful in designing intervention studies to improve the health of truck drivers.