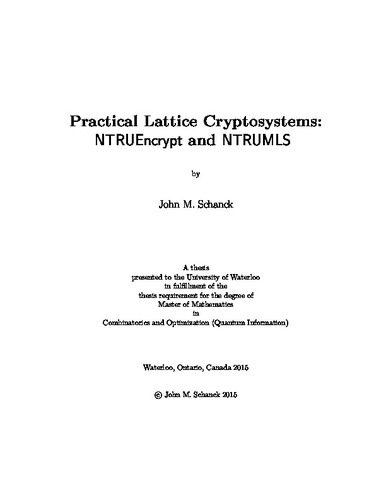 Public key cryptography, as deployed on the internet today, stands on shaky ground. For over twenty years now it has been known that the systems in widespread use are insecure against adversaries equipped with quantum computers -- a fact that has largely been discounted due to the enormous challenge of building such devices. However, research into the development of quantum computers is accelerating and is producing an abundance of positive results that indicate quantum computers could be built in the near future. As a result, individuals, corporations and government entities are calling for the deployment of new cryptography to replace systems that are vulnerable to quantum cryptanalysis. Few satisfying schemes are to be found. This work examines the design, parameter selection, and cryptanalysis of a post-quantum public key encryption scheme, NTRUEncrypt, and a related signature scheme, NTRUMLS. It is hoped that this analysis will prove useful in comparing these schemes against other candidates that have been proposed to replace existing infrastructure.