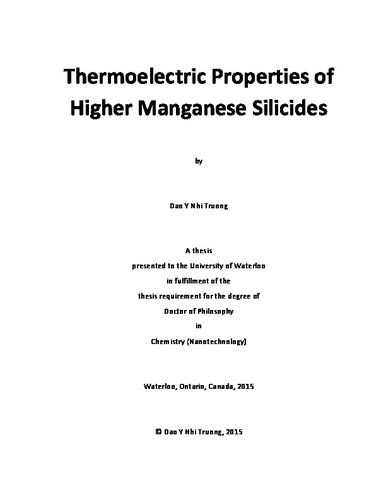 This work aims to cover a variety of aspects relating to the Higher Manganese Silicide (HMS) system, e.g. composites, substitutions, synthesis methods, and structural evolutions. The composites made of HMS-based compounds and nano-inclusions have been prepared via two different procedures, i.e. (i) solid state reaction, manually mixing, and hot pressing, or (ii) soft ball milling and reactive spark plasma sintering. The later approach has proved its effectiveness in preparing the multi-walled carbon nanotube (MWCNT)/HMS-based material composites mainly containing the HMS phases with a homogeneous distribution of MWCNTs. It was demonstrated that a fine distribution of the nano-inclusions played a crucial role in reducing thermal conductivity through enhancing phonon scattering in HMS-based materials, resulting in an improvement by about 20% for the maximum efficiency for the MWCNT/HMS-based material composite with 1.0 wt.-% MWCNTs. The substitution of molybdenum, tungsten, or silver at the Mn sites, and of germanium or aluminium at the Si sites has been studied for the HMS-based materials. The best thermoelectric efficiency among different Ge contents was achieved for the phase mixture of the non-stoichiometric composition MnSi1.75Ge0.02, which was then chosen to be the base material for further substitutions. No crucial modification of the electrical properties of the base material was observed, but large decreases of lattice thermal conductivity were achieved because of enhanced phonon scattering, with the highest reduction up to 25% for molybdenum substitution. The maximum figure of merit, ZT, value was approximately 0.40 for the material with 2 at.-% molybdenum substitution at the Mn sites. The maximum ZT values ranging from 0.31 to 0.42 have been achieved for various compositions prepared by mechanical alloying, mechanical milling and heat treating in conventional furnace, as well as by solid state reaction, which could possibly be improved by completely eliminating the side products. Subsequently, a simple and effective process was used to synthesize undoped HMS, involving ball milling in n-hexane under soft conditions to obtain homogeneous mixtures of constituting elements, and subsequent spark plasma sintering for a direct solid state reaction. The obtained fine particles after the milling process in n-hexane helped to improve the reaction rate later on, resulting in pure HMS materials. As a consequence, the maximum thermoelectric figure of merit obtained was 0.55 at 850 K, a high value for undoped HMS. Moreover, single crystals of HMS have been prepared using chemical vapor transport with very low yield, but their poor qualities resulted in low resolution in single crystal XRD. HMS-based materials including the ones with different Si/Mn atomic ratios and various dopants, e.g. Ge, Al, Cr, and Mo, have been prepared for the investigation of structural evolution upon heating up from room temperature to high temperature. The average structural formula at room temperature and its temperature dependence were strongly impacted by the phase compositions of the starting materials as well as the nature of dopants. Physical property measurements on the MnSi1.75 compound revealed that a correlation between the thermoelectric properties and the average structural formula of bulk HMS-based materials could be expected.