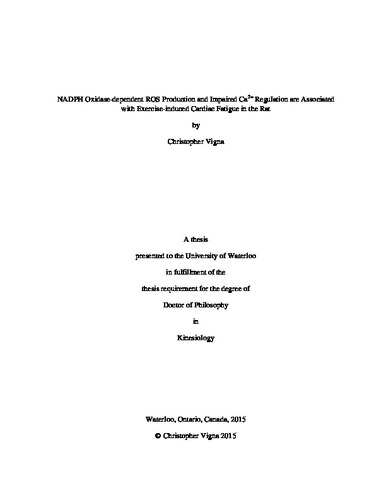 Cardiac fatigue is a phenomenon that is characterized by a transient reduction in left ventricular contractile and/or relaxation function following acute aerobic exercise. Few studies have utilized rodent models to examine possible cellular mechanisms associated with cardiac fatigue given the logistical limitations present in human models of cardiac fatigue. Thus, the overall objective of this thesis was to determine if oxidative stress, impaired regulation of Ca2+, Na+ and K+ or increased proteolytic activity contribute to the development of cardiac fatigue using a rat model. The aim of the first study in this thesis was to develop an exercise protocol that induced cardiac fatigue. Male Sprague-Dawley rats (21-23 weeks) were randomly assigned to either a control group (CTL), an acute exercise group (AC) or a group that performed acute exercise and were allowed to recover for 24 hours (24H). Animals in the AC and 24H groups performed treadmill running (5% grade; 20 m/min) until exhaustion, which occurred after 69 ± 3 and 72 ± 5 minutes in the AC and 24H groups, respectively. Subsequently, the hearts from anaesthetized animals were excised, perfused in a retrograde fashion and instrumented, which permitted the assessment of heart rate, hemodynamics and left ventricular contractile and relaxation properties. The exhaustive exercise protocol induced cardiac fatigue in the basal state as indicated by a respective, 12 and 14% reduction (p<0.05) in LVDP in the AC and 24H groups. In addition, there was a trend (p=0.076) for a reduction in the maximal rate of pressure decline (-dP/dt) but no significant differences (p>0.05) in the maximal rate of pressure development (+dP/dt) were observed. The cardiac fatigue present in the basal state persisted during β-adrenergic stimulation, such that LVDP was significantly lower (p<0.05) in the AC and 24H groups and –dP/dt was lower (p<0.05) in the AC group during the isoproterenol (ISO) dose response. The cardiac fatigue observed in the basal state and during β-adrenergic stimulation was not due to changes in coronary flow or heart rate, which suggests that the mechanisms responsible for cardiac fatigue stem from within the cardiomyocyte. The features of cardiac fatigue were reminiscent of myocardial stunning, which directed the experiments in Chapter 3 to examine reactive oxygen species (ROS) production, Ca2+ homeostasis, proteolytic activity and regulation of Na+ and K+. Left ventricle (LV) homogenates were collected for in vitro experiments. Norepinephrine (NE) and epinephrine (Epi) were extracted from plasma and the concentrations were determined using a HPLC assay. The maximal rates of Ca2+-ATPase activity and Na+/K+-ATPase activity were determined using a NADH-enzyme linked spectrophotometric assay. A fluorometric assay and the Ca2+ sensitive dye, Indo-1 were used to measure the rates of Ca2+ uptake, leak and release. The production of ROS was determined using dihydrodichlorofluorescein-diacetate, which, upon oxidation, yields the highly fluorescent dichlorofluorescein. Lipid peroxidation was determined by measuring the concentration of malondialdehyde (MDA) in LV homogenates. Western blotting and immunoprecipitation were used to assess protein expression and to determine RyR specific oxidative post-translational modification. Acute exercise resulted in a ~5-fold increase (p<0.05) in plasma Epi concentration, which returned to baseline 24 hours post-exercise. There were no differences (p>0.05) in plasma NE between the groups. The maximal rates of Ca2+-ATPase activity and Na+/K+-ATPase activity were not affected (p>0.05) by exhaustive exercise. In addition, the rates of SR Ca2+ release were not significantly different between the three groups. A novel finding was that the rate of SR Ca2+ leak increased ~40% in the AC group when compared to the CTL group (p<0.05). These data suggest that impaired Ca2+ regulation may have contributed to the cardiac fatigue observed in the AC group. The functional alteration to RyR was associated with a ~15% increase (p<0.05) in ROS production in the AC group. However, lipid peroxidation and glutathionylation, nitration and carbonylation content on RyR were not significantly different (p>0.05) between the three groups. Furthermore, the ratio of phosphorylated RyR (pRyR) to total RyR was not altered by acute exercise despite the rise in plasma Epi. The increased SR Ca2+ leak in the AC group likely contributed to the increase (p<0.05) in calpain activity observed in the AC group. Taken together, an increased rate of SR Ca2+ leak and subsequent calpain activation may contribute mechanistically to the cardiac fatigue observed in the AC and 24H group via reduced SR Ca2+ load and excitation contraction uncoupling, respectively. The purpose of the experiments presented in Chapter 4 were to examine the hypothesis that NADPH oxidase (NOX) inhibition would prevent cardiac fatigue by reducing ROS production, reducing SR Ca2+ leak and preventing calpain activation. NOX was inhibited by providing 1.5 mM apocynin (APO) in the drinking water of rats for three days prior to the exhaustive exercise bout. NOX inhibition prevented exercise-induced cardiac fatigue as LVDP and -dP/dt were not significantly different (p>0.05) between the three APO treated groups, whether in the basal state or during β-adrenergic stimulation. The production of ROS was similar amongst the APO treated groups (p>0.05). The rates of SR Ca2+ leak were not significantly different (p>0.05) between the APO treated groups. In association with the reduced rates of SR Ca2+ leak, the calpain activity was not significantly different (p>0.05) between the APO groups, which likely contributed to the prevention of cardiac fatigue in the APO 24H group. These data suggest that improved Ca2+ regulation and reduced proteolytic activity likely contributed to the prevention of cardiac fatigue in the APO AC and APO 24H groups. These studies demonstrate that cardiac fatigue present immediately after exhaustive exercise was associated with increased ROS production and increased SR Ca2+ leak and that cardiac fatigue present 24 hours post-exercise was associated with enhanced proteolytic activity. In the presence of NOX inhibition, cardiac fatigue was prevented and ROS production, SR Ca2+ leak and calpain activity were maintained at control levels. Although these results demonstrate a strong association between NOX activity and ROS production with SR Ca2+ leak and cardiac fatigue, the exact mechanisms that prevent Ca2+ leak remain to be determined.