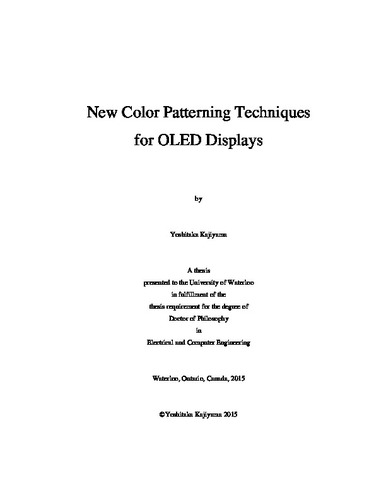 Organic light emitting devices (OLEDs) are light emitting devices consisting of a stack of organic semiconductors sandwiched by electrodes. Since the first report of a high-efficiency device by Tang and Van Slyke in 1987, OLEDs have attracted considerable attention, particularly for use in flat panel displays. OLEDs provide these products improved power consumption, contrast, response speed, viewing angle, and compatibility with flexible displays. The performance of OLEDs has improved considerably, especially in terms of stability and efficiency, so they can now meet the requirements for some display products. However, the commercialization of OLED displays remains limited and is hampered primarily by manufacturing issues. These issues include low manufacturing yield, high fabrication cost, and low display quality. Manufacturing issues are largely attributed to difficulties with the color patterning process, the fabrication process by which arrays of red, green and blue (RGB) OLEDs can be made side-by-side on one substrate in order to obtain a full-color display. Currently, RGB color patterning is done by sequential vacuum deposition of red, green and blue materials through a pre-patterned shadow mask, which is typically made of a thin metal sheet. This technique is widely known as fine metal mask (FMM) technology. However, this technique has several inherent limitations, including mask deformation, difficulties in mask-to-substrate overlay alignment, and ability to make masks with micrometer level dimensional accuracy. These limitations reduce the manufacturing yield, display resolution, and display aperture ratio (the ratio of the emissive area to the total surface area of a display). Despite the fact that several approaches for addressing these limitations in OLED displays have been proposed, there is still no commercially viable solution. In this thesis, two novel color patterning techniques for OLED displays are proposed. One approach utilizes laser-patterned polyimide (PI) sheets as shadow masks. This technique takes advantage of the good processability of PI by direct laser ablation, which makes it possible to cut through it to create slits with very high dimensional accuracies. In addition, because this is a dry process, the laser-patterning of the PI sheets can be done after the sheets are already stretched and mounted on the metal holder. This avoids post-patterning deformation of the masks by the stretching step. The use of laser also makes it possible to pattern the PI sheets after they have already been mounted on the thin film transistor (TFT) backplane substrates and thus, in a variant of this technique, allows for the shadow mask to be created in-situ. This in-situ shadow mask patterning technique can be expected to offer further accuracy advantages, since the slits are created by laser over the desired TFT locations directly, and thus eliminates the need for a subsequent mechanical alignment step. This approach can be particularly useful for RGB OLED patterning on flexible substrates where the poor mechanical and dimensional stability of substrates pose additional challenges for aligning shadow masks accurately. The other color patterning approach proposed here is based on the diffusion of a luminescent material from a donor substrate into the organic host material layer of the OLED that is pre-coated on the backplane substrate. The RGB color patterning in this case can be done without the use of shadow masks, so this approach offers significant advantages. The use of a pre-patterned micro stamp as the donor substrate allows the physical contact between the two substrates to be selectively limited to certain areas, which in turn allows limiting this diffusion to only certain areas of the OLED substrate. Such selective diffusion can also alternatively be done through local heating via electric currents, using electrodes in the OLED backplane for this purpose. This eliminates the need for patterned stamps and mechanical alignment. In this work, these two techniques are introduced and tested with the purpose of assessing their potential for RGB patterning. As part of this investigation, the effect of using these techniques on OLED performance is also studied. Finally, a first proof-of-concept utilization of the techniques for producing RGB OLEDs fabricated side-by-side on one substrate is demonstrated.