A Quantitative Model of Perception of Randomness in Structured Space 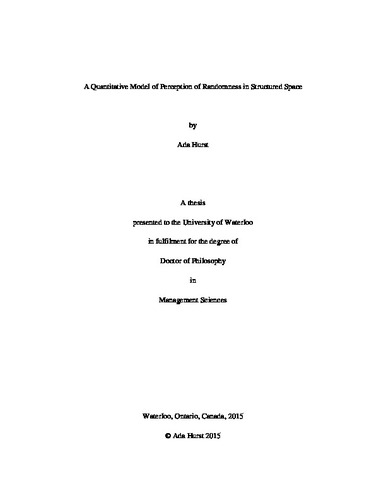 The literature on the perception and generation of randomness suggests that people’s conception of randomness deviates from true randomness in predictable and consistent ways. In general, people see patterns or repetitions as evidence of non-randomness (Nickerson, 2002). In the 2D domain (e.g., grids) in particular, people believe that random chance occurrences do not fall in clusters, in similar locations (e.g., same row or column), or on the corners and edges of the space (Falk, Falk & Ayton, 2009). A common explanation given is that spread-out and patternless occurrences in the interior of the grid are locally representative of what people believe random chance occurrences to look like. But why do people make this association in the first place? Given that random sequences are minimally compressible (Nickerson, 2002), Falk and Konold (1997) suggest that people judge the randomness of a sequence based on their tacit ability to encode it. Cells that are clustered or located on the edges of a grid are easier to encode (i.e., describe, memorize) and are thus judged as less random. This explanation, however, fails to account for people’s strong preference for the center of the grid, which is in itself a location that is easy to encode. Additional explanations based on positional biases for the center (Christenfeld, 1995) and variety seeking tendencies, including diversification bias (Read & Lowenstein, 1995), choice bracketing (Read, Lowenstein & Rabin, 1999), partition dependence (Fox, Ratner, & Lieb, 2005), and distinctiveness (Ayal & Zakay, 2009), only add to a patchwork of theories that cannot in themselves provide a complete explanation of the observed behaviour. Therefore, the main research objective of this thesis is to formally characterize and explain people’s choices when they generate random selections in structured two-dimensional space. In Study 1, people’s choices were formally observed in a controlled experiment. Participants searched for an item (prize) that was hidden in a 9x9 grid by a random process. Trying to ‘match’ that random process, they generated selections that avoided the edge of the grid, and were spread out such that they were rarely near each other or in the same row or column. Based on analysis of data from Study 1 as well as data from Falk et al. (2009), we observed that people group cells in a 2D grid by proximity - e.g., cells in the immediate vicinity of a selected cell, or by similarity - e.g., cells in the same row or column. Cells pertaining to a group are judged as having similar attributes, including similar probability assessments. Given a selected cell, we defined its ‘coverage’ to be the perceptually-formed grouping to which it belongs: fundamentally, a cell 'covers' similar or nearby cells. We then proposed that people judge the randomness of selected cells by their perceived coverage: the higher the coverage, the more random are the cells perceived. The effect of the grouping size on a group element’s judged probability was confirmed in Study 2. Based on the above, we designed a quantitative model that evaluates coverage in a 2D grid, taking into account two factors. First, the size of an individual cell’s coverage is directly affected by the size of the grid. Second, the aggregate coverage of multiple cells is not equal to the sum of coverages of the individual cells; rather, the calculation takes into account the amount of overlap between those individual cells’ coverages. It was shown that individual cells that fall on the edges and sets of cells that are clustered together all have low coverage values. We tested the validity of the model in two experiments (Studies 3A and 3B) conducted using different 2D 6-cell arrangements. Study 3A showed that a cell’s calculated coverage predicts participants’ judgements of its randomness. Study 3B showed that the pairs of cells that participants judge to be most random have the highest aggregate coverage, as predicted, but a low sum of their individual cells’ coverages. In conclusion, our model of coverage provides a self-contained explanation and prediction of people’s perception of randomness in structured 2D spaces. Notably, the model provides a single explanation for both the edge avoidance and spreading aspects of choice.